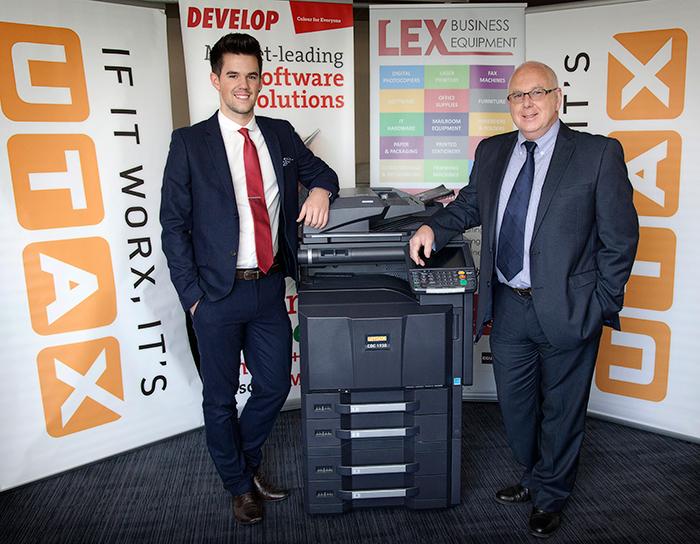 2015 marks the 35th anniversary of Manchester-based Lex Business Equipment. The company, which cites UTAX and Develop as its major print partners, is a true family affair.

Managing Director Wayne Elphick, an ex-Olivetti technical engineer, set up the dealership back in 1980. Then, in 2008 his youngest son Sam joined the firm’s service department to gain work experience during a gap year.

Sam quickly developed a passion for all things print-related and, cancelling his plans to go to university, chose to remain with the family firm and learn the business from the ground up. Seven years on, he’s a print industry convert. Having worked his way through the ranks, he currently heads up the firm’s sales operation and was made a director earlier this year.

Lex predominately serves customers within a 30-mile radius of its head office in Radcliffe, including several that have offices throughout the UK.

“We have a number of clients whose head offices are in the North West but who also have operations nationwide. As a UTAX partner, we are able to utilise their national service infrastructure, which means we can provide the same levels of technical support across all locations, without having to send our engineers across the country. That is a real plus for us,” explained Sam.

The company currently has a headcount of 12, which includes four service engineers.

“Even today, when the focus is predominantly on solutions that improve business efficiency, there are instances where price is still king. When up against some OEMs, we have to make sure we’re priced as competitively as possible to win that business,” he explained.

He added: “Our background is in service and that’s really our USP. It’s this expertise and heritage that gives us a competitive edge, and we’ve been really successful winning tenders on the back of this value proposition.”

Lex Business Equipment has enjoyed sustained growth, closing the last fiscal year with a £210k increase in turnover and a 23% rise in pre-tax profits.

“We have grown quite significantly, in the last two years in particular, and have a business plan in place to support our future growth plans,” said Sam. “We are now two-thirds of the way through the current financial year and are on course to achieve a year-end turnover figure of £1.65m.”

Sam expects future growth to come from the upselling of solutions to its existing customer base and from new business generated by promoting the benefits of working with a local supplier.

As part of its expansion plans, the company has just launched a new e-commerce website, which will also be used to promote its office supplies and furniture divisions.

“This move will further increase our online presence and drive transactional sales across printers, small MFPs and IT hardware,” Sam explained.

In addition, Lex Business Equipment is running a six-month radio advertising campaign, from May to November, to drive device sales and to promote its MPS offering. “The campaign will focus on exploiting the tiered billing feature that the UTAX range of MFPs has, and we are quite confident this will be a success,” said Sam.

He adds that the campaign has already led to a huge influx of website traffic, with more than 90% of visitors new to Lex Business Equipment.

With growth firmly on the agenda for the next five years, Lex Business Equipment is ready to increase headcount and invest in staff training to ensure it continues to offer the best service to its customers.

“We recognise that our people are our biggest asset and we continually look at how we can further develop them,” said Sam. “For example, we recently placed two of our employees on management courses to upskill. We have an ultra-low staff turnover and we’re very proud of that; our service manager will this year celebrate his 25th year working at our company!”

As part of the firm’s 35th anniversary celebrations, later in the year Lex Business Equipment is treating staff and their partners to an overnight stay at a DeVere resort. The company is also planning to mark the milestone with an event for customers and suppliers.