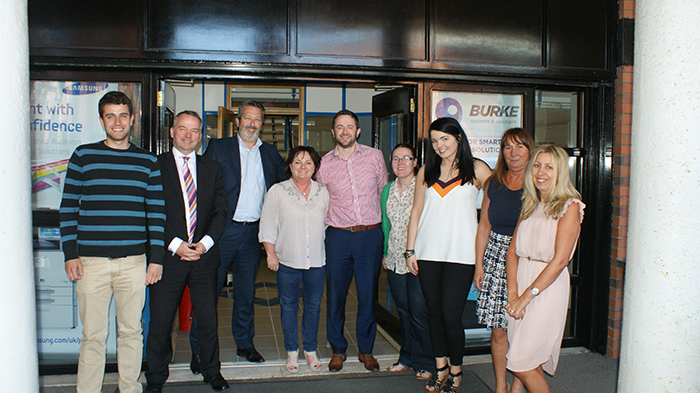 Belfast-based Burke Systems and Solutions kicked off its 40th year in business with a strategic acquisition, a move designed to support the company’s goal to increase its foothold in the market.

Managing Director Michael Burke told PITR that when his father Daniel set up the company in 1976, it was called Burke Office. “My father’s background was in selling and servicing business machines, such as typewriters, adding machines and copy machines. When the business started, consumables were a bit of a specialist area. We were appointed a Memorex agency and sold a wide variety of OEM products,” he said.

He added: “The market in Northern Ireland is a little bit different from the rest of the UK. It’s a much smaller geographical area

where everyone knows everyone – people buy from people. We really looked after our customers (and still do) and we quickly built up a good reputation.” As the business grew, the company moved into new offies on the Ormeau Road in Belfast. Then, in 1984, it became a real family affair, when Daniel’s son Michael and his daughter Grainne joined the fim.

It was at this point that the business really took off. Michael went straight into sales, knocking on doors and building up the business. In addition to business machines, Burke Offie supplied stationery and furniture and, as the industry changed, it moved into the IT sector, selling computers and printers – mainly Olivetti, Canon and HP.

An expanding customer base and increased sales across all segments prompted a move into new 3,000 sq ft premises in Belfast’s historic Gasworks area.

In 2013, in order to promote its expertise within the print solutions and services market, the company separated out its offie supplies and furniture concerns, rebranding its print business as Burke Systems and Solutions. “The reason we did this is because we started out as a business machines specialist, but in reality we were better known as an offie supplies provider,” explained Michael.

“One of the key business objectives was to become a major player in the MPS space and we needed a clear identity that would better communicate our expertise as a systems and solutions provider to our target market.”

Today, the company is Samsung’s OA partner for Northern Ireland.

“That’s a big feather in our cap, and sets us apart from competitors,” explained Michael. “We made a tactical decision to become a single-line reseller a few years back. It streamlined things from both a stock holding view and on the technical front. Our engineers are fully trained on Samsung’s technology and it’s much more effiient in terms of carrying spare parts and supplies. Plus, we receive terrifi support from Samsung.”

Michael says it’s a great accolade for a local company to be associated with such a big brand, adding that the partnership with Samsung has worked really well. “We almost catch people off guard and we’re having huge success winning new business once our customers see the technology in action,” he said.

At the beginning of this year, the company acquired Belfast-based offie products and interiors business One Office, which it has integrated into its existing offie supplies division, now rebranded Burke One.

The two divisions operate autonomously and independently, with dedicated teams on each side of the business. David Martin, former Managing Director of One Offie, heads Burke One, while Michael operates Burke Systems and Solutions. “Customers like that. They know we are focused on specialist areas and have confience in our ability to deliver expertise across each segment,” Michael explained.

“We have a creditable turnover of circa £800k within the OP sector and circa £550k in the print business. There’s huge potential on the interiors side and we have great hopes for future growth,” said Michael. “One of the biggest benefis of the acquisition is that we are now talking to those customers about MPS.”

The company has a five-year plan to grow into a £5m business, but this year, Michael expects both arms of the business to perform at around the same level. “We are being realistic. This fist year is all about settling the merger and getting the infrastructure right so we can move forward,” he said.

“Our success to date has been down to prudent management, and we are looking to continue our tradition of steady, profiable and sustainable growth. I have every confience that we are in a fantastic place to realise our future goals.”