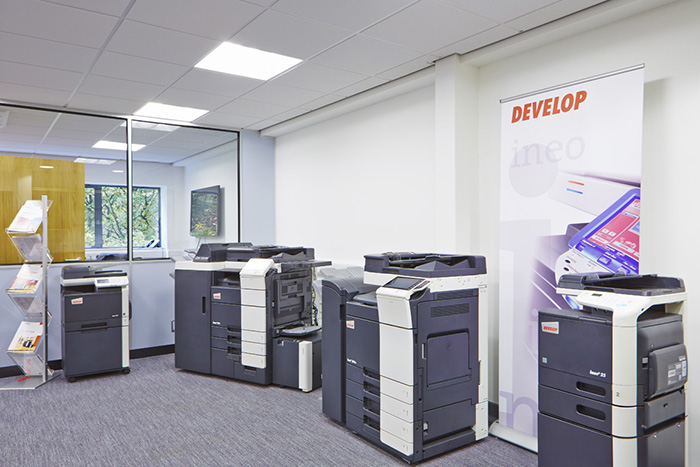 A landmark year for DSales (UK)

2016 is the tenth anniversary of DSales (UK), the UK distributor for the Develop range of multifunctional document imaging systems, making it a landmark year for the Ripponden-based firm.

Prior to setting up DSales (UK), Managing Director Jonathan Whitworth had already racked up over 20 years’ experience in the office products sector, working for brands including Panasonic and Muratec. In his former role, he initiated talks around securing a distribution agreement for Develop products in the UK, but in the end the decision was made not to proceed. However, Whitworth had spotted an opportunity to go out on his own and approached Develop about taking on the distributorship personally.

“Develop was established in Germany as a reprographics manufacturer in 1948, but subsequently became part of Minolta. When Minolta merged with Konica, the Develop name in the UK wasn’t quite so prominent, but I had lots of confidence in the brand and viewed the opportunity to become the UK distributor as one too good to miss,” explained Whitworth.

“Ten years ago, Konica machines were specialist and expensive, but Develop was about to launch a range of mass market devices. I could see massive potential here – colour was definitely a future growth area. And I was proved right: 97% of our sales in the first five years were colour devices and colour is still our mainstay today, equating to around 90% of unit sales.”

Fast growth
The company was self-financed by Whitworth and his former business partner, whom he bought out after a couple of years.

In the beginning, Whitworth worked out of a shed in his back garden. “I didn’t have access to external borrowing and we grew very quickly,” he said. “I did everything from sales, to invoicing, to deliveries. I closed over £2 million of business from that shed! The hardest thing to deal with was cashflow. I can remember waiting for the postman to deliver the cheques so I could quickly cash them in order to buy more stock.”

Whitworth’s industry experience meant he knew a lot of dealers personally and he grew his partner network through personal contact and trust.

“We were competitive. We were offering devices at sub £3k at a time when most OEMs started at £3.5k, and I made an early decision that we would always hold stock of the most popular models and not risk ‘just-in-time’ shipments, which are never on time,” he said.

“Our ability to offer competitive pricing, fast decision-making and excellent service is what won us our reseller partners initially. Consistently delivering on our promise over the years has ensured we both retain customers and continue to sign up new accounts.”

In its first year of trading, DSales achieved a six-figure profit. Since then, turnover has risen consistently year-on-year, reaching £13.2 million in the last financial year. “It was tough at the beginning. We had to run a tight ship so that we could continue to trade,” Whitworth explained. “We couldn’t give credit, but luckily all of our customers were really supportive; they knew when we said we needed paying within seven days, we meant it.”

When eventually DSales was able to extend credit terms, it was hit with bad debt from a handful of companies that went bust. “We had one account where we lost a six-figure sum, and I had to make up that shortfall. Going back to Germany to say I couldn’t pay wasn’t an option,” explained Whitworth.

Riding the storm
In 2008, the worst financial recession in 80 years ushered in a period of hardship for all businesses, but particularly for a relatively young operation. “But we still managed to grow every year through the economic storm, thanks to the dedication of the DSales UK team and the hard work of our dealer partners,” said Whitworth.

“The most difficult element of the downturn was the credit crunch, which made it very difficult for our dealer partners to secure financing for customers. Making a sale and then having to tell the customer no credit was available for the deal was tough for dealers. Fortunately, we were able to secure credit from a couple of finance firms so our partners could close deals. That earned us a lot of positive goodwill in the channel and word spread quickly that we could make deals happen.”

New premises
Continued growth meant that by 2010 DSales needed to move from its small business unit into larger premises. “We’d got to the point where we had to up our game and become more professional in the range of services we offered. We needed more space and so we bought our current headquarters at a business park in Ripponden, West Yorkshire,” said Whitworth.

The new building accommodated workshops, offices, a showroom and a training centre, which DSales was able to extend six months later when it purchased an additional 1,600 square feet of space in the building next door.

In 2013, the firm announced the opening of a new Heathrow base to serve channel partners and their customers in London and the south-east of England. The showroom, conveniently located close to the M25 and M4 motorways and adjacent to Heathrow airport, provides southern-based DSales (UK) dealerships with a facility where they can demonstrate the latest models in the Develop multifunctional range, without the need to acquire their own demonstration stock.

Moving with the times
Whitworth says the biggest changes over the last ten years have been the growth in colour; the increasing trend for A4- only MFPs; rising demand for document management software as part of a total hardware and software solution for document imaging; and, most recently, the huge growth in mobile working practices and the need to support direct input from mobile devices like smartphones and tablets.

“The Develop ineo+ range of colour MFPs is very strong, particularly in the crucial mid-range 30-49 ppm category. As nine out of ten MFP orders from our dealers are for colour devices, this excellent product line-up places us in a great position for 2016 and beyond,” said Whitworth.

“Also strengthening our sales position for 2016 is support for mobile working, which features in the latest Develop ineo MFPs. More office workers now access the internet via their mobile phones than use laptop computers. This fast growing trend for mobile working means that mobile workers don’t want to have to log onto a desktop computer to print and scan. They want to be able to action this straight from their mobile device to save time and limit inconvenience.”

The latest Develop ineo MFPs use NFC (Near Field Communication) to allow direct pairing with a mobile device, authentication, touch to print and touch to scan. According to Whitworth, there are more NFC-enabled products due for launch in 2016. “This will give our dealerships a competitive edge when it comes to talking to existing and prospective customers about upgrading their fleets, because support for flexible mobile working patterns is now a critical MFP application,” he said.

It employs 13 people – three sales people, four engineers, four administrators, a marketing manager and a product manager – and has a significant number of dealerships across the UK, including many who are single-line. “In the main, we’re usually taken on as a strong second brand that complements a dealer’s existing product offering,” explained Whitworth.

He added: “As the economic recovery is now well under way, we believe that the combination of Develop hardware and software innovation, coupled with DSales’ outstanding service delivery, will win us new dealer partners and many more customers in 2016.”

As to what the next 10 years hold, Whitworth said: “I wish I knew! People have been predicting the paperless office for as long as I have been in the industry and that’s quite a while now. Yet paper refuses to die. I think MFPs will become document servers with print and scan functionality, plus the ability to store and route documents. With the economy now in great shape, we look forward to a golden era for the industry.”

To celebrate its tenth anniversary, DSales is planning a series of business events over the next twelve months with staff, dealer partners and customers. Whitworth said: “We have exciting plans in place and fully intend to keep on growing and expanding our business, despite operating in a fiercely competitive market. We look forward to sharing our vision for future success with our partners during the course of the next year.”