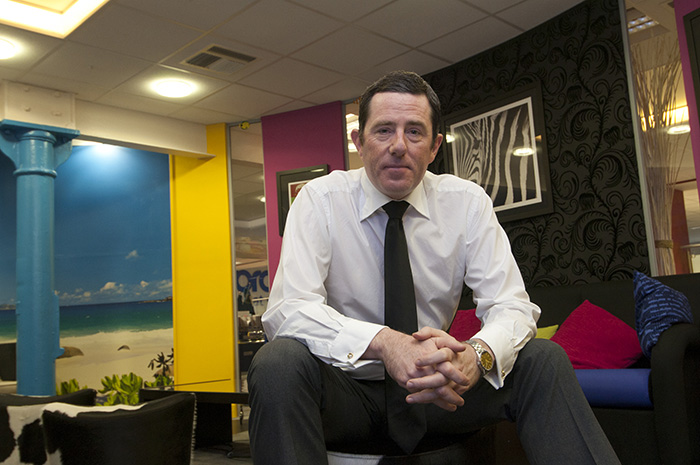 A passion for potential

Following the news that Phil Jones, Managing Director of Brother UK had been awarded an MBE in the Queen’s Birthday Honours list in recognition of his services to business, PrintIT Reseller spoke to the industry stalwart about his passion for uncovering the potential of people and business

Congratulations! What were you doing when you heard the news and how did it make you feel?

Phil Jones (PJ): It was really bizarre. I was working from home and about to leave to head off to London when I saw an email from my PA with a subject header that said: ‘This is the proudest email I’m ever going to send you’. Intrigued, I opened it and my first

thought was ‘wow that’s unexpected’. Packing my stuff up to leave, I put a post-it note on the letter and left it next to the kettle for my wife Caroline saying ‘call me’, and went to get the train. On the train I got a text from her saying: ‘Is this for real?’ (as I often play practical jokes at home) and it all started from there.

PITR: Presumably you wanted to shout about it from the rooftops?

PJ: Well although I received the letter from the Cabinet Office on May 23rd, they ask you to keep it confidential until it’s officially announced on June 10th. So I didn’t tell anyone apart from close family. But once it went live, my phone was buzzing with texts, emails and tweets, around 600 or more in the space of a few days.

That first week was very humbling. I’ve never before or since, had so many inbound communications particularly focused on me as a person. I replied to them all, and by the end of the week I was emotionally exhausted!

It was a great life lesson, I did think how hard life must be if you’re in the public eye or if you’ve got a million Twitter followers and you have to handle so much communication, it’s not something I could do on a permanent basis. Although I have an industry and public profile, I’m most keen that this is always to assist the business, our customers and those looking to grow, not really for ego or validation, so it felt quite strange to have a spotlight so firmly fixed in my direction. The news is now firmly out there now, so things have died down and it’s back to business as usual.

PITR: Talking about life outside of Brother, you’re a keen cyclist aren’t you, and what else do you do to unwind?

PJ: I believe that when you’re leading a large company it’s key that you’re fit for work and it’s really important to be able to de-frag mentally. For me, cycling gives me that outlet. I follow a programme that a professional coach puts together for me and I cycle for around twelve hours a week (200+ miles). I spend about six hours on the roads at the weekends and every evening I work out for an hour on a high-performance exercise bike at home. I use that time to think more extensively about things outside of a normal busy day at work.

If you want to be a peak performer in business, then you need to be in good shape physically and mentally, cycling is the way I do that. In addition, cycling also satisfies the data techie in me, I totally understand how my body works, my metabolism etc. I also get to explore lots of new places and meet new people, so it’s perfect on many levels.

My wife and I are also huge Northern Soul aficionados. We both really enjoy going to events, it’s our shared passion and so far removed from work. I also love the fact that at a Northern Soul do I can be anonymous, I’m just Phil in the Fred Perry shirt, as opposed to the MD of a large multi-national and industry figure. It’s a very nice piece of micro-escapism.

PITR: In addition to heading up Brother, you are also President of Forever Manchester, a member of the Manchester Growth Company’s strategic advisory board, a fellow of the Institute of Directors and a Companion of the Chartered Management Institute. How do you fit everything in?

PJ: You have to be well organised, a great delegator and highly prioritised as a starter for ten. I have a superb executive assistant and a highly capable management team around me too, which is absolutely key.

I’ve been a great believer for many years that you’ve got to give something back in one way or another. I’m passionate about business as a force for good in people’s lives and in our local communities, that’s why I commit my time to share knowledge and encourage other entrepreneurs and businesspeople. As one person, the only way to reach many, is to do things that create scale, so as one example I blog on a regular basis and my articles have had over one million readers.

I strive to change outcomes for other people and consider things that will help me to achieve that goal on a larger scale. As for fitting everything in, giving one per cent of your time, your income and your profits is a pretty good place to start and that works for me.

My involvement with the Forever Manchester charity which funds and supports community projects across Greater Manchester is nowhere near as time-intensive as people may think, initially it was a little heavier but now it all runs very smoothly.

I also sit on the Manchester Growth Company’s strategic advisory board, a major vehicle for supporting entrepreneurial start-ups and business growth services in Greater Manchester. We meet once a quarter and my role is to bring the private sector perspective to the discussions around resource deployment.

It’s a small investment of my time, but it helps some 80,000 businesses in the region. That’s what I mean by doing things on scale, and it demonstrates how you can reach millions by scalable touchpoints. It’s the use of vehicles such as this that makes the most efficient use of your time if you’re in business.

PITR: Tell me a little bit more about your involvement with the charity Forever Manchester?

PJ: I’m passionate about communities, and in developing and investing within our community not just in Brother but also in the wider community it is a part of. I met the Chief Exec of Forever Manchester a few years back at a fireside chat and we realised we had so much in common.

They were looking for someone to assume the role of President with a view to getting businesses engaged and investing in Greater Manchester’s local communities and it was a great fit for me.

Brother UK created an initiative designed to support our borough Tameside, in three areas: Enterprise, Education and Elderly, and we donate a sum of money every year which is held in a ring-fenced fund which employees at Brother UK oversee and distribute. Residents in the borough can apply for a grant to support them in starting up something new – it could be anything from an unemployed person wanting to start a new enterprise, to a group of elderly friends looking for funding to buy materials for a knitting club.

Forever Manchester does that in all ten boroughs and I am the public face of the charity to business. It’s not all about giving money. I’ve also helped by reshaping it to be a better business, it’s much stronger organisationally and in its communication alignment.

PITR: You have been with Brother UK for over 20 years and worked your way up the ranks. Under your stewardship the company has transformed and celebrated some significant achievements, what are you most proud of?

PJ: It has been a fascinating journey and back in 1994 when I joined as a fax salesman, I never imagined that I would one day be leading the company. In 2014, Brother UK was named by The Sunday Times as one of the 100 Best Places to Work, the business was described as ‘outstanding’ and the personal leadership rating one of the highest placed. That was an incredible achievement for everyone in the company.

Brother was also the second company in the UK, the first large business and the first technology business to receive the most prestigious accolade in people management – Investors in People (IIP) Platinum status.

Investors in People estimates that only 0.05 per cent of businesses could achieve platinum status, so we’re all incredibly proud of the award which represents a culmination of many years of hard work re-purposing our business.

There are only eight companies in the UK that have earned Platinum status and just a few weeks ago at a national awards ceremony we won ‘Best of Platinum’, I am really very proud of that accreditation. For me what is most pertinent about these accolades is that it demonstrates the efficacy of how we have successfully transformed our business to move forward.

We’ve been around since 1968 and we have all been on a journey that included changing our culture to make us relevant in the modern digital world. Learning and development, collaboration and innovation are key drivers for our longterm competitiveness and to ensure we remain at the forefront of developments in the technology industry and also as an employer, and all our hard work has paid off.

Now we’ve done it, we can say to other businesses, we did it – it’s a lot of hard work and you have to change, but we did it in just three years. On the back of this, we’ve also had a number of blue-chip business connect with us with a view to helping them do what we have done. This places Brother in a lovely advisory role that helps us bring to life our ‘At your side’ mantra.