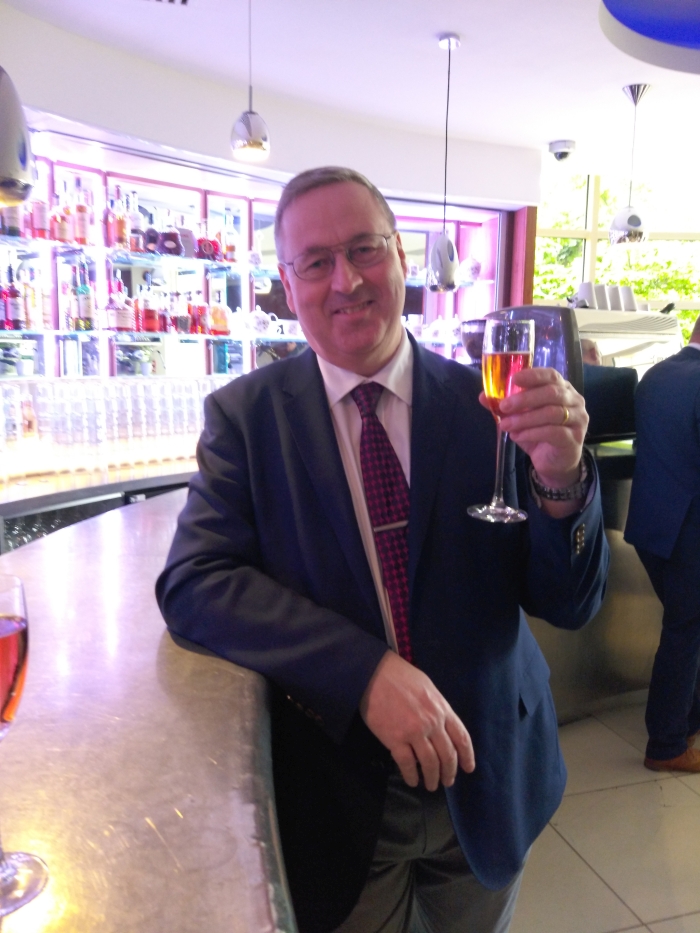 A tribute to Wayne Snell

Industry stalwart Wayne Snell, as renowned for his incredible personality as he was for his unparalleled knowledge, sadly lost his short battle with cancer and passed away on March 30

Wayne was a mentor and inspiration to many during his 30-year tenure in the print industry. During his stellar career he worked at Konica Minolta and Olivetti, and most recently at DSales (UK).

Likeable, approachable, helpful Former colleagues have paid tribute to Wayne across social media platforms with many acknowledging the support, guidance and friendship he provided over many years. One former colleague said: “Like many people who had the pleasure of working with Wayne, there is a lot to say ‘thank you’ for.”

Another described him as a unique person. “You never heard a bad word said about him. Likeable, approachable, helpful and a great support to his colleagues. The measure of the man is his great knowledge and a reputation that will continue long after his passing.”

Others shared memories of their time working in the field with him including the one time he jumped in his shared plane to get up north to support colleagues at an important meeting – whereas anyone else would have driven up or got the train!

Many more who had the pleasure of working with him described him as a ‘great guy’, ‘an absolute gem of a gentleman’, ‘one of the nicest people I have ever had the privilege to work with’, ‘an invaluable and ever helpful veteran of the product management world’ and the list goes on.

One of the really ‘good guys’

Alison Locke worked with Wayne for 15 years. She said: “Wayne was one of the really ‘good guys’ and the epitome of professional. His presentation skills were second to none and he brought to life whatever subject he was presenting, with his famous ‘show-tell-show’ method, or putting everyone at ease with his gentle humour, such as when he would introduce himself by explaining that he owed much of his knowledge to the time when he was YTS or ‘Young, Thick and Stupid’!

“He had an incredibly full life outside of work too and was never happier than outlining his plans for a walking holiday with his wife Steph and their border collie Jess. Steph said they all loved the beaches and the sea and most recently had three of the best holidays ever in Pembrokeshire.

“Originally, when Wayne left school, he wanted to join the RAF but, due to his eyesight not being 20-20 he wasn’t able to do that so, instead, he did the next best thing and achieved his private pilot’s licence. He was in his element taking friends and colleagues for short flights in the Cessna and would have made a brilliant commercial airline pilot – so calm and in control. When he became too busy to fly, he built himself a flight simulator in a spare bedroom and I often heard him talking to other enthusiasts about the ‘hairy landings’ he made at some of the world’s most ‘dodgy airports’!

“Photography was another passion, he took the most creative wildlife photographs. Notably, he shared this passion with Nadia List, a product manager at Olivetti in Italy. When she called to discuss the latest USPs of a new colour MFP, the conversation would invariably turn to the latest photo techniques or camera they had both discovered. I learned a great deal from Wayne’s telephone conversations!

“Wayne and I once organised an epic series of roadshows to launch a new range of products when at Konica Minolta. These events had the entire team on the road for three months. Because of his unswerving leadership qualities, he kept morale and enthusiasm high when everyone, including himself, was flagging; especially when we were packing away after one show, to head to the next town, to set up at 3am the next day! After a particularly long week, Wayne instructed us all to stand in a circle facing into the middle. He then asked us all to turn to the right, raise our right arms so our hand was touching our neighbour’s shoulder and then pat vigorously! It was a Team Pat-on-the-Back. We couldn’t help but feel re-invigorated about what we had achieved, even though we were all exhausted.

“Wayne made time for everyone. He was wise, practical and made such a deep impression on everyone he met. Meticulous and knowledgeable, he showed all of us how things should be done properly without an ounce of condescension. His loss is an immense tragedy.

Respected by everyone Wayne joined DSales in 2015 and very quickly became an integral member of the very close team who are all devastated by his passing.

Managing Director Jonathan Whitworth said: “Wayne joined us at a pivotal time for our company, bringing his vast industry knowledge and expertise to further enhance our business. He was respected by everyone who ever came into contact with him and you would have to go a long way to find a nicer all-round person. His contribution to our industry over the last 30 years has been exemplary and the three short years he spent with DSales were incredible.

“We are going to miss his warmth and character, it genuinely feels like we have lost a member of our family. Our thoughts and love are with Steph at this difficult time.”