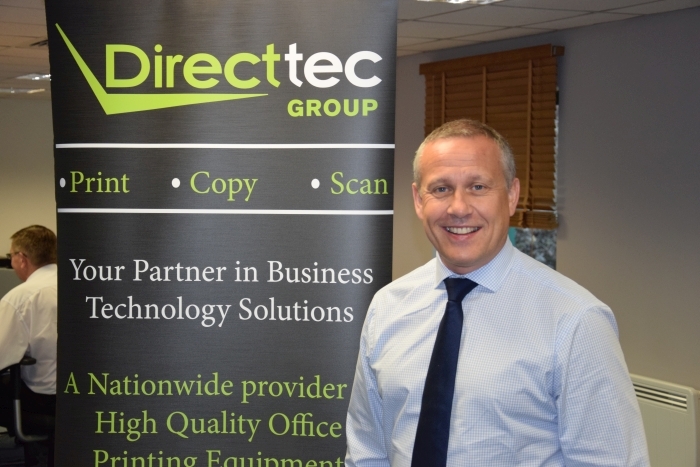 Established in 2004 as a hardware-only reseller, Direct-tec has gone from strength to strength. It has three acquisitions under its belt, more in the pipeline and has recently opened a new purpose built service centre

Twelve years ago, three guys who had worked together in a number of dealerships for many years decided to break away and set up a business that specialised in the supply of printers and copiers. Sales Director Simon Riley who joined Direct-tec four years later from Sharp, had also worked with all three partners for a number of years. “They made me an offer I couldn’t refuse,” he said.

From day one, the trio – John Maryam, Adrian Crucefix and Peter Stocker, made a strategic decision to leverage the service provision offered by its OEM partners as opposed to running its own team of engineers.

“The thinking behind this was quite clever,” Riley said: “Who better to service and maintain the hardware than the manufacturer? From a customers’ perspective that was a really compelling proposition.”

Providing products that are supported by the manufacturers’ own service technicians throughout the life of the contract enabled Direct-tec to offer clients a reliability guarantee. “From the outset we stated that if the machine supplied does not perform to the manufacturer’s specification during the period of the contract then it will be replaced,” Riley added.

Direct-tec was originally a Ricoh (Lanier) single-line dealer but early on the directors saw real value in adding a second line and signed up with Sharp Electronics. Today it partners with Sharp, UTAX and Toshiba. Business across the three OEMs is fairly evenly split. “UTAX gives us a competitive edge within the A4 sector in particular,” Riley said, adding that he believes that Direct-tec is one of UTAX’s largest resellers, whilst Sharp and Toshiba offer award winning A3 products.

The company initially rented office space at Biggin Hill Airport. “Our first office was above an aircraft hangar and I believe it housed Bernie Ecclestone’s private jet,” Riley said. Four years in it purchased its current HQ in Westerham and at the same time closed its satellite office in Spitalfields London, moving all operations into one central base.

Direct-tec has extended its portfolio to include IT Support, looking after PCs and servers as well as post room facilities and has enjoyed sustained double-digit growth year on year. The business which employs 44 people has an annual turnover of £7 million and is targeting ten per cent growth this year.

“With the exception of last year when we invested heavily in a number of areas (and still achieved 8.4 per cent growth), we have recorded on average 20 per cent increase in turnover every year,” Riley said. “This growth is both organic and through acquisition,” he added.

In 2013, the company completed two significant acquisitions, merging SMS Digital Office Solutions and Genicom into the Group, moves designed to expand its coverage within the UK. Around the same time, further expansion and sustained business growth saw the firm open new premises in Salisbury.

More recently it acquired Yeovil based Lynx Copiers which has also been incorporated into the Salisbury office.
Lynx Copiers worked in close consultation with Direct-tec for a number of months, exploring how they could enhance the products it offers and help maximise savings by combining purchasing power and passing savings onto its customers.

The merger will see Lynx Copiers’ customers gain access to products from all three OEM partners as well as the backing of a larger service team to support their engineers during busy periods and holidays.
In-house service

One of the biggest step changes to come about on the back of its acquisitions was the decision to set-up an in-house service operation. “Around six months ago, we decided to bring service in-house,” Operations Director, Ian Mitchell explained. The company now employs 15 service engineers. “It was a tactical move designed to give us more control and enable us to offer a bespoke set of services to MPS customers,” he added.

The company opened its new purpose built service centre in May. The building houses its customer care team who handle all customer requests for repairs and consumable replenishment across the UK.

“Our investment in both infrastructure and people [Direct-tec added 15 new members of staff to the existing team] – was substantial,” Mitchell said, adding that the new service centre will provide an even better level of service to customers as well as providing spare capacity to cope with its ever expanding customer base.

“In addition,” he added. “Our new distribution centre has enabled us to considerably increase our stock holding of both spare parts and consumables. Added to that we have improved the cut off times for orders as well as benefitting from faster delivery times and improved tracking facilities.”

Another advantage is that it makes them more attractive to businesses looking to sell. “We are in negotiations with a number of organisations,” Mitchell said. “And what we’re finding is that now we have an in-house service operation, they are more open to engaging with us as we’d look to keep their engineers on board following an acquisition.”

Direct-tec has also unveiled a new online portal for customers to securely log service and supplies requests. “We worked closely with our software partners over the last few months, testing and refining the facility for our customers to log requests directly into our service management system,” Mitchell said.

“We believe that this is an industry first which enables our customers to generate a service request with all the details we need to dispatch a service engineer or select the exact supplies required against their specific equipment,” he added.

The firm selected the British Heart Foundation as its preferred charity. It promotes the initiative on its website and social media channels. Direct-tec conducts an annual customer survey and for every customer that completes a survey it makes a donation to the charity.

Staff are also proactive in terms of supporting charities close to their heart. Members of the admin team recently raised £1,500 for Parkinson’s Trust. Laura Chapman and Ellie Cudmore completed a Tough Mudder challenge to show their support to Steve Kingston (Laura’s dad) who suffers from Parkinson’s. Direct-tec matched the funds raised.
And the firm has also sponsored the Surrey FC Senior Cup for the past two seasons.

Business is good, according to Riley, who says that the firm is very much looking forward to another strong year. “As we have grown, so has our buying power. We have hardware and service pricing that is enabling us to win business in a number of competitive market places, including education, healthcare, charity and commercial sectors.”

Customer service is at the core of the Group and its customer promise is to deliver tangible efficiency gains across print, IT and telecoms through its range of managed services. “The customer benefits extends beyond simply achieving cost savings,” Riley said in conclusion.