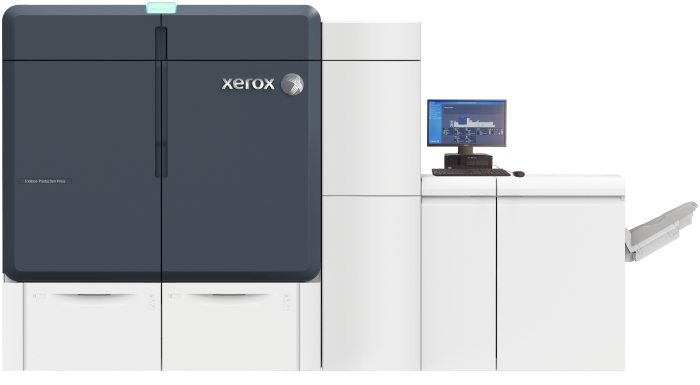 And one makes six

Xerox’s six-station Iridesse Production Press is an economical alternative to offset and foil stamping for the ‘short run, short turn’ printing of metallics and iridescent hues

From the catwalk to the stationery cupboard, there’s no escaping the craze for metallic finishes and iridescent special effects. With the introduction of Xerox’s six-station Iridesse Production Press, metallics could become commonplace on printed output too, from cards, signage and book covers to brochures, direct mail and POS material.

It is already possible to produce metallic effects and to enhance CMYK print jobs with silver, gold or clear varnish-based spot embellishments. But doing so typically requires a number of processes and sometimes additional equipment, such as foil stamping.

The reason the Xerox Iridesse Production Press has been described as ‘a definite game-changer’ is that it is the world’s first device to print process CMYK plus two specialty dry inks in a single pass at rated speeds of up to 120 pages per minute with spot-on registration.

Using these as an underlay or overlay to CMYK, as a wash or a spot colour, produces a range of effects. For example, combining a silver underlay with CMYK tints produces a range of metallic colours that can be given greater visual interest, depth and contrast with an overlay of Clear dry ink. Or, for a warmer look, you could use gold for the underlay.

New opportunities
The ability to create iridescent effects in a single pass, combined with wide media latitude (52-400gsm) and inline finishing options, opens up all sorts of possibilities for creating premium output at a price and a speed that simply wasn’t possible before – and in quantities that would once have been too small to be financially viable.

Research by Keypoint IntelligenceInfoTrends suggests that there is strong demand for digital print enhancement, with volumes growing at a CAGR of 27% to 2020, and that nine out of ten print buyers would be willing to pay a premium of 24%-89% over CMYK-only print.

The good news for PSPs is that the profit margin for such material is a tempting 50-400%. No wonder, 50% of the PSPs surveyed by Keypoint Intelligence-InfoTrends are considering buying a digital device that produces metallic dry inks, clear dry inks and expanded CMYK output to help them stand out from the competition and deliver more value-add applications.

Big benefits
The big advantage of Xerox’s six-station configuration is that everything can be done in a single pass, more quickly and without the risk of errors common to manual, multi-step processes. Instead of having to print silver first, then unload the print sheets, walk back to the feeders, re-release the print job and hope there are no registration problems when printing process CMYK, all colours can be printed in one pass.

The press does also support multipass printing, for example to add texture and ‘dimensionality’ to output.

Another selling point of the Iridesse, especially for ‘short run, short turn’ print jobs is the fast turnaround between jobs. Xerox claims it takes just 15 to 20 minutes to stop one job, change the dry inks, reconfigure the press, make adjustments for the new dry ink and start the next job. No manual cleaning is required between jobs and there is no flushing of inks.

Beyond CMYK
The addition of extra colour stations may be an obvious enhancement – Xerox already offers a fifth station on its Xerox Color 800i/1000i (optional for gold and silver metallics) and on its iGen5 press (white or clear dry ink) – but it is technically challenging.

Not surprisingly, the Xerox Iridesse Production Press is based on a number of technical developments, some of which have been seen on other devices, such as Xerox Versant presses. These include:

Ultra HD Resolution. Xerox claims the combination of 2400 x 2400 dpi imaging resolution and up to 1200 x 1200 dpi 10-bit rendering throughout the entire chain, from the print server to the print engine, delivers four times more addressable shades than competitive presses; and

HD EA Toner. A new low gloss toner formulation with smaller particle sizes (4.7 micron, down from 5.8 micron) enables the even transfer of up to six layers of toner for clear fine lines, crisp text and smooth gradients. With no toner fuser oil, output can be written on or coated after printing. In addition, HD EA Metallic Dry Inks developed by Fuji Xerox incorporate reflective flakes for added sparkle.