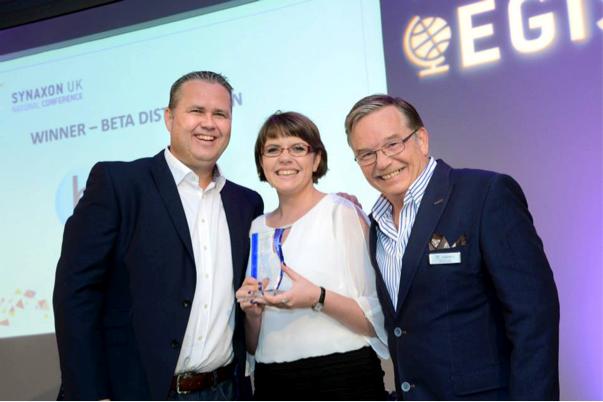 Beta Distribution were last week awarded not one but TWO industry awards – both on the same evening!

In London, at the Connaught Rooms, the annual Storage Awards, or Storries as they are commonly referred to, took place with over 350 industry people in attendance. Widely recognised as the leading awards ceremony for the data storage industry, Beta received the prestigious “One to Watch” Award, an award sponsored by Oracle.

This is quite an achievement and recognises Beta’s continuing development as a leading Value Added Distributor for data and storage products and services. Recent announcements of their appointment as a Distributor for brands such as Overland, Falconstor and Exablox, the recruitment of some industry experts and the introduction of new services, such as NAS configuration, all contributed to this recognition at the awards.

On the same evening in Daventry at Staverton Park, the annual Synaxon conference was taking place. With over 150 people in attendance, the awards are voted for by the Synaxon members and Beta won the award for ‘Distributor of the Year’, an award sponsored by Ingram Micro.

Commenting on Beta’s success, Managing Director Steve Soper was obviously delighted to win. ‘It’s clearly very pleasing to receive awards that are voted for by the industry’. He added, ‘Our reputation in storage products and services will continue to grow and these awards are recognition of what we’ve already achieved’.

Published in Distis and News