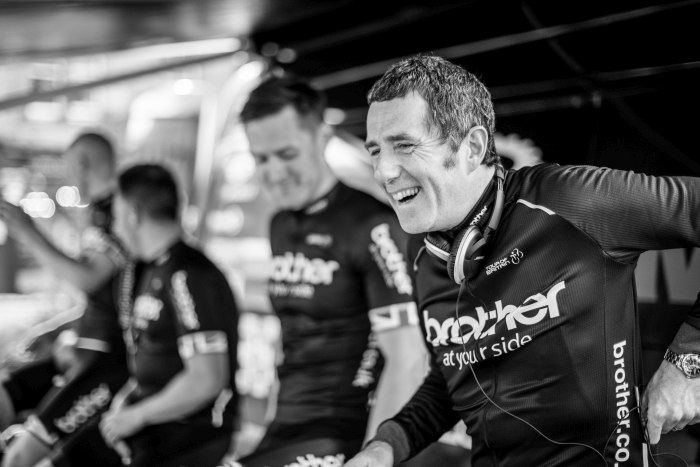 Both Jones and Brother UK turn 50 this year, and the cycling aficionado has decided to mark both milestones by riding the entire route of the Brother-sponsored 2018 OVO EnergyTour of Britain in September – one day ahead of the elite professional riders who will tackle the same demanding 704-mile long eight-stage course

2018 also marks ten years since Jones first got back on his bike. “Turning 40 was a key driver for me to make some changes to my somewhat sedentary lifestyle. In common with most people, I was busy with my career, travelling up and down the country, raising a family and I realised I wasn’t doing much exercise,” he said.

“Getting back into cycling has seen me get much fitter and lose weight, however there have also been some great mental health benefits – cycling is a great stress buster, it clears the mind and helps me focus,” he added.

Jones cycles around 200 miles per week – the majority – around 130 miles – on the road with the balance completed on a static bike at home. He plans on increasing this to 300 miles per week in the run up to September and plans to build in one 70-mile round trip from home to the office into his training schedule each week.

Inﬂuential supporter
As his passion for the sport grew. Jones became much more actively involved on both a personal and professional level. Under his leadership, Brother UK has become the most inﬂuential supporter of grassroots British cycle sport, providing consistent, committed support in a range of areas for the last seven years.

The company is the official print and results partner of the OVO EnergyTour, helps seven development teams, sponsors some of Britain’s biggest races and funds a ﬂeet of neutral service support vehicles which assist in the domestic racing calendar as well as helping out at many high profile sportives and single day events. “These vehicles support every team and every rider at multiple events, so it really works as a universal support service aligned with our values as a business,” he explained.

The Tour of Britain, which has a history stretching back to the post war years, has grown in popularity each year since race organiser SweetSpot relaunched the event in 2004. Its position on the calendar attracts some of the biggest names in the peloton, who use the race as final preparation for the annual World Road Race Championships.

Unfolding over eight days The OVO Energy Tour of Britain is Britain’s premier multi-stage race, unfolding over eight days. The 2018 parcours is particularly challenging, with a hilly route through some of the UK’s most iconic landscapes. Previous British winners of the race include former Tour de France winner Bradley Wiggins (2013), and the reigning British road and timetrial champion, Steve Cummings (2016).

Jones describes this challenge as a celebration of ordinary people doing extraordinary things. He will cycle the eight-stage course that even elite professionals regard as demanding, alongside cancer survivor James Golding, the world record holder for the greatest distance ridden in seven days. He has set an ambitious fundraising target of £50,000 for the Dave Rayner Fund, a voluntary organisation that supports young British riders racing abroad.

One of the vehicles from Brother UK’s neutral service ﬂeet will follow the pair in support.

Jones’ ‘One Day Ahead’ challenge will start in Carmanthenshire on Saturday September 1. After riding 109 miles on day one, Jones and Golding will be driven to each of the next stages taking in Bristol, Nuneaton, Leamington Spa, Cockermouth and North Yorkshire, before finishing in London on Sunday September 9, the same day as the race. The gruelling schedule allows for one rest day on Saturday September 8, when Jones will host a gala dinner in central London to raise further funds for the Dave Rayner Fund.

Each day the cycling duo will be joined by ‘ordinary people doing extraordinary things’. Jones said: “On day two for example the Army cycling team will join us, we will also ride with Paralympians, as well as some of the women’s and men’s riders that Brother sponsors plus riders supported by the Dave Rayner Fund.”

The Dave Rayner fund has allowed some of the most successful British riders of the last 30 years to pursue their dream of turning professional. This year the fund is supporting a total of 36 riders (nine female and 27 male) to live and race abroad for various teams in Europe. Of the 36 riders, 20 are funded for the first time.

Physical challenge
“Turning 50 in 2018 made me think about doing something big in terms of a physical challenge, shine a light on some of the brilliant people I’ve met through my involvement with the sport, while also raising awareness for the excellent work of the Dave Rayner Fund,” Jones explained.

Speaking on behalf of the fund, former British champion Tim Harris said: “It’s great to see an initiative like this. Riding multi-stage events takes a lot of preparation. It won’t be easy by any stretch of the imagination, and Phil will need to be in peak physical and mental condition. I know he will be up for the challenge, and having a world record holder like James by his side will push him on to the finish.”

Jones acknowledges that this will be the hardest thing he has ever done on a bike. “My first charity challenge was 30 miles from Manchester to Liverpool in 2008, which felt like a huge challenge, and now I’m ready to join James Golding in taking on the UK’s leading multistage race, totalling around 1500km of distance. Cycling has given me so much, and I am keen to give something back to the sport,” he said.

A number of fundraising events are planned before the challenge. “£50,000 is a lot of money to raise,” Jones said, adding: “But it’s achievable and I am determined to hit that target.” Donations are being sought from commercial businesses and Jones is also asking road cyclists across the UK to contribute perhaps by giving the cost of a cappuccino and cake – £5.00 – via the Dave Rayner website

Further information on the challenge can be found at www.race-pace.net and donations can be made via the Dave Rayner Fund website at www.daveraynerfund.co.uk