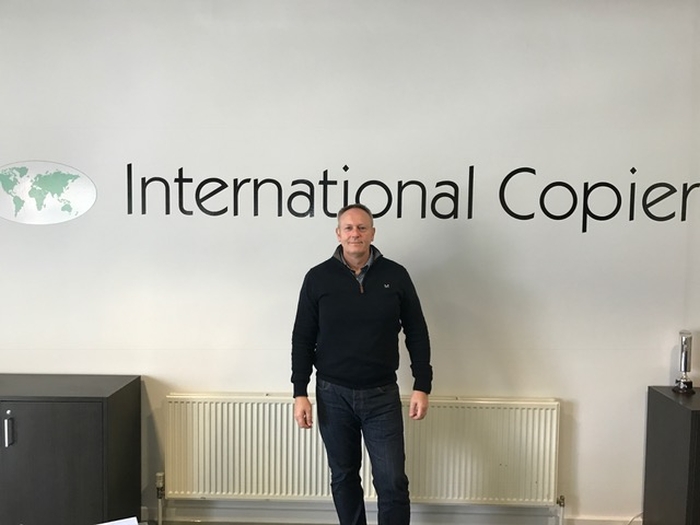 Business is booming at home and abroad

24 years ago, International Copiers Directors Rob Wood and Paul Anderson, saw the potential in reselling second-hand printers and MFPs more profitably. In 1994 the market had been established, but not exploited to its full potential. They set themselves an unambitious target to reach a turnover of £2 million in three years and have enjoyed steady but significant growth year on year ever since.

“Historically there had been a huge problem getting rid of old printers and copiers, in my previous role, every time we sold a new device we’d end up with a used machine, these just clogged up the warehouse,” Wood explained. “Whilst it’s fair to say that many of the five-year-old ones were unserviceable, there were lots of models that had not reached end-of-life but were in good working order, we ended up selling them for next to nothing just to get rid of them – we realised there must be a better way and this prompted us to set up the business.”

Three years ago, Wood and Anderson had an idea that in an industry where margins are constantly under pressure, economy of scale would win the day. They invested in a £4 million purpose designed HQ in Reading that included a massive 75,000 sq. ft. of warehouse space. “It was a move that we made in order to facilitate future growth and we can confidently say we’ve grown into the space now,” Wood said.

Increases all round
In the past twelve months, the company has increased the number of devices it processes each year from 40,000 to 50,000. Turnover has also grown from £10 to £12 million per annum. Headcount has also increased, International Copiers now employs 51 staff and does not sub-contract any of its warehouse operations.

“Business has been booming,” Wood said, adding: “The warehouse typically houses around 8,000 printers and copiers at any one time. No sooner do we bring them in, we are professionally preparing and packing them so they are ready to ship out worldwide by the container load.”

The export market in particular is growing exponentially. “When we first set-up the business, although we were called International Copiers, around 95 per cent of the business we conducted was in the UK,” he said.

Initially International Copiers started buying up old devices and selling the better quality ones to dealers. “In the early days, we shifted around 40 per cent of the copiers we bought through the channel, but that still left us with a lot of the less popular and older models in stock,” Wood explained.

It was for this reason that they first decided to look outside of the UK as a complementary channel to resell older and less feature-rich devices to other countries, which led them to investigate the export market.

“Today, we are glad we had the foresight to include international in our name, as 80 per cent of our business is export now!” Wood said.

Wood attributes the boom in export sales to a number of factors. “There is strong demand for used printers and MFPs worldwide – many nations see it as a cost-effective way to access new technology and it just keeps on growing. When we talk to other traders they are experiencing the same demand – it really has taken off.”

Wood said that there is no one country or region where demand is greater. “It really is across all corners of the world, and that includes the UK – that side of the business is still very important to us and one of our biggest strengths is that we have developed a sales channel over the years that allows us to ship and sell literally worldwide.”

International Copiers sources used devices from OEMs, dealers and leasing companies. The company also has another arm, webuyanycopier. com which according to Wood, brings in additional revenue from the enduser market. It deals with any model from desktop printers to production presses and all brands, although Ricoh, KYOCERA, Xerox, Toshiba, Canon and Konica Minolta are the most common makes. “We buy the majority of equipment in the UK but if we’re short on stock we do also buy in Europe,” Wood explained.

The company runs a fleet of Mercedes vans and trucks which are on the road every day collecting machines, bringing them back to head office to be evaluated. Only the very best remain in the UK and these quality used devices are returned to its large UK dealership customer base. “We recently increased or vehicle fleet and we now have double decker HGVs capable of collecting 100 copiers at a time,” Wood said, adding: “This was a great move, we’re able to double the load on each run, we’ve lowered our diesel bills and carbon emissions, and importantly it’s been good for our customers as we can pick up all their used stock in one visit.”