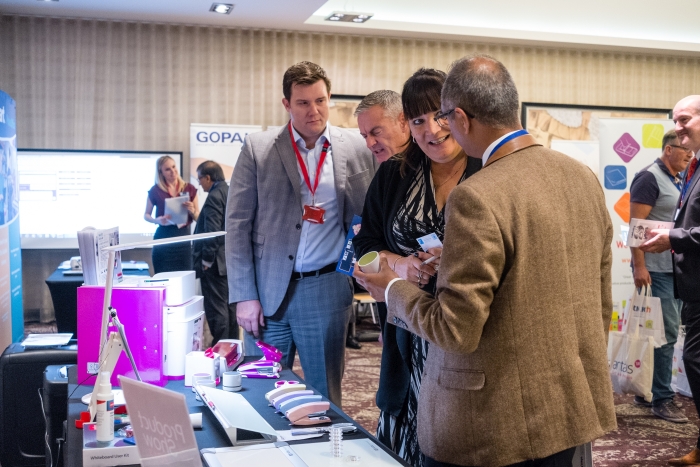 McDonough reflected on the past 20 years when organisations including Amazon and Google, which he described as being ‘the greatest catalyst in driving down margins in this industry’ did not exist. Speaking about the here and now, he acknowledged a number of contributory factors that have made the current climate ‘incredibly dynamic and tough for dealers’. Sharing his thoughts on the future, he predicted that the current trend for consolidation through mergers and acquisitions would continue, a state of affairs where he sees both challenges and opportunities for the independent dealer.

“There are sectors of growth in this industry and so many opportunities,” he said, urging members to look to diversify and seize the opportunity. “You’ve got to decide what will make the most impact on your business, look at your client base and see what else you can add as a managed service – that’s something the corporate and e-commerce providers can’t deliver,” he stated.

He continued by stressing the importance of relationships. “Our strategy has got to be fundamentally about growth – whether that’s in revenue, margin or anything else,” he said, adding: “That’s the direction of travel for us and the strategic partnerships we have with distributors and suppliers is key.”

McDonough outlined a number of new areas such as the relationship with Findel within the Education sector as well as the new MPS solution in partnership with Centrex Services (see page 32), both of which have been developed to help members win new business.

In a keynote address, Philip Lawson CEO, BOSS Federation provided invaluable insight into the future trends in office working practices and the impact these will have on the sector over the next five years.

“We’re now in the 4th Industrial Revolution,” he said, adding that automation and AI, immersive technology – virtual reality, IoT, man-machine integration and big data, are all now becoming ubiquitous, and potentially represent a huge threat to the sector.

However he argued that those same potential threats also present the independent dealer channel with opportunities. The agile dealer could look to exploit those technologies to win, he reasoned. For example selling products through virtual reality, using AI to be lean and fit for purpose, or tracking orders/fulfilment and measuring asset use via RFID tags.

“It makes sense to have a paradigm shift,” he said. “Should we become trusted advisors selling solutions and securing recurring revenues? Still selling the things you are already selling, just in a different way. The future’s bright for those who can adapt,” he said in conclusion.

Workshops
In a thirty minute workshop, Peter Waycot, Training Specialist & Performance Coach, Inspire Me, provided delegates with some invaluable advice on how to overcome objections when prospecting and innovative ways to uncover additional sales opportunities.

Attendees benefited from his vast experience and in-depth understanding of the key issues sales professionals are facing in a declining market. In this session, he focused on how members could uncover additional sales opportunities outside of general office supplies, whilst creating differentiation in the eyes of their buyers.

He also posed some food for thought, offering advice on ways to increase additional category spend and uncover new sales opportunities with existing and potential customers.

With members facing competition from both public sector and private sector organisations, he demonstrated the advantages of the Findel/Integr collaboration which offers members access to a wide range of resources. These include a product offer in excess of 30,000, marketing support and collateral, as well as catalogues, along with the ability to offer prospects and customers the ability to download the catalogue directly into schools’ financial management system, enabling them to easily look up and order products.

Clarke reported that to date 63 resellers were working with Findel of which the highest performing member had achieved sales of £78,000 FYTD.

David Emery of COS Group shared his experience of working with Findel. He spoke about his company’s approach, revealed revenue was up 212% on the previous year, how the firm was now working with one in eight schools within Wales and how the education-specific offer had opened the door to schools who were now also buying from the company’s core product range.

An audience with Kevin Keegan OBE:

One of the most recognisable faces in British football, Kevin Keegan, whose career highlights includes England international player and manager, tenures with clubs including Liverpool and Hamburger SV and managing Newcastle United, Fulham and Manchester City, ended the day on a high.

He regaled the audience sharing anecdotes and stories of his stellar career. Kevin spoke about some early knock backs, including how he desperately wanted to play for Doncaster Rovers and was turned down due to being ‘too small’. He explained how he got his first big break playing for Scunthorpe United and how part of the job was to clean the floodlights, his move to Liverpool a few years later and how he transitioned into management.

During the Gala dinner, guests were invited to make a donation to Cancer Research and once again dug deep raising an incredible £1,722. Integra added to the coffers, bringing the grand total raised on the night to £2,000.