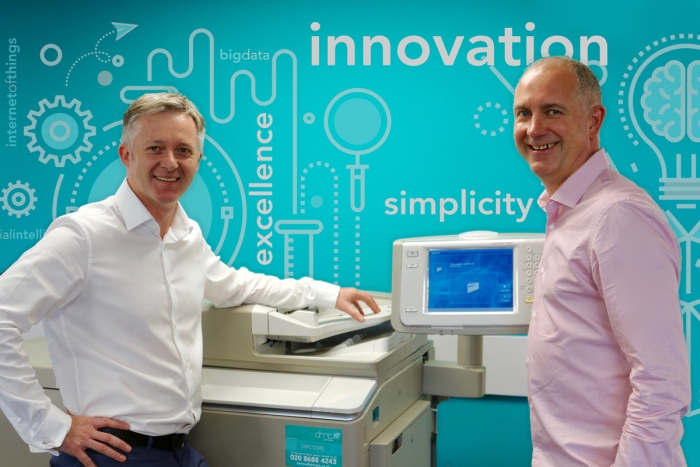 DMC Canotec has marked its 25th anniversary year with the acquisition of First Offce Systems Ltd, the company’s third in as many years

DMC was first established in 1991 by Jon Hill and Justin Nicholson and two years later, it added a distribution arm with the introduction of Damian Kelly. Within the past few years, the group has been recognised in the Daily Telegraph ‘Hot 1000’ as one the UK’s most inspirational and exciting, growing businesses.

Acquisitions drive growth
During the 1990s, the business acquired a number of copier sales and service companies in London and the North West of England. These acquisitions included Wrekin Office, Unistat and Pace, as well as a customer base in London.

In 2010, DMC acquired Imcopex, a move that expanded its distribution arm and in 2013 it integrated the operations of Canotec, one of Canon UK’s top Advanced Solution Partners which had an extensive customer base in London and the South/ South West of England, into the group. This move brought together two key service providers in the industry, each of whom had a 20 year-long heritage and a common focus on customer service, innovation and attention to detail.

By combining the three businesses worth an estimated £40 million, the group became one of Canon’s largest and most advanced independent suppliers of print and document solutions in the UK and Europe.

As with all integrations, DMC Canotec allows the acquired companies to operate as independent subsidiaries with the long-term view of merging them into the group, in order to maximise the business’ brand value. Members of the key senior management team and staff including Canotec founder David Newman, (currently DMC Canotec Marketing Director) and BCL Managing Director Philip Kavanagh (DMC Canotec Group Sales Director), remained in position to drive the next stage of the organisation’s growth plans.

Broadening its portfolio
This month saw the group complete on the acquisition of Kent-based First Offce Systems Ltd, a strategic move designed to broaden the portfolio of managed services to document management solutions, managed print services, IT managed services and telecoms. The addition of First Office Systems also provides DMC Canotec with a sound platform to further grow its presence in Kent.

The company’s service provision covers the majority of the country, it has regional offices in Bristol, Ringwood and Croydon, as well as the newly added office in Tunbridge Wells, Kent following the First Office Systems acquisition. From January 2017, DMC Canotec will be Canon UK’s authorised service provider in the South West.

Kavanagh said that the group’s strategy for growth over the last three years has been to join together like-minded businesses, with the aim of delivering outstanding customer service, adding: “We are really looking forward to working with a new team that matches our existing culture and ethos.”

Commenting on the group’s latest acquisition, Mark Eyden, Director of Partner Channel at Canon UK and Ireland said: “Canon has been working with DMC Canotec and First Office Systems for many years and we are excited about the benefts the combined company brings to their customers.”

He added: “We are delighted to see the continuing growth of DMC Canotec, who are one of our strongest partners in the UK. Their company ethos of striving for customer service excellence, combined with a range of print and information management solutions means that they are very well placed to take advantage of the opportunities within the market. We congratulate the teams at DMC Canotec and First Office Systems on a successful integration and look forward to strengthening our partnership.”

Changes at the top
Earlier this year, Simon Davey who spent 26 years in financial services including roles in strategy and sales leadership, joined DMC Canotec as Managing Director. At the same time, Co-founder and former Managing Director Jon Hill, assumed the role of Group CEO, continuing to take overall responsibility of the entire business.

DMC Canotec also appointed a number of employees from within its 140-strong workforce to Director and Associate Director roles, reﬂecting the contribution they have made to the group. Hill said: “Without a doubt our company’s greatest asset is our staff. We now have a senior management team with the vision, confidence and experience to successfully lead our growth in a rapidly changing market.”

Charity support
As part of its CSR commitment, DMC Canotec supports the Starlight Children’s Foundation, which grants once in a lifetime wishes and entertainment for seriously and terminally ill children within the UK.

The business is aiming to raise £10,000 this financial year (by March 2017) through staff fundraising activities and donating 25p for every planitgreen toner sold. To date, employees from offices in Croydon, Bristol, Manchester and Ringwood, have given up their spare time to raise funds through a variety of activities from hiking, running and swimming, to charity car boot sales and cake bakes. The fundraising team recently hit the £9,000 mark, well ahead of schedule.