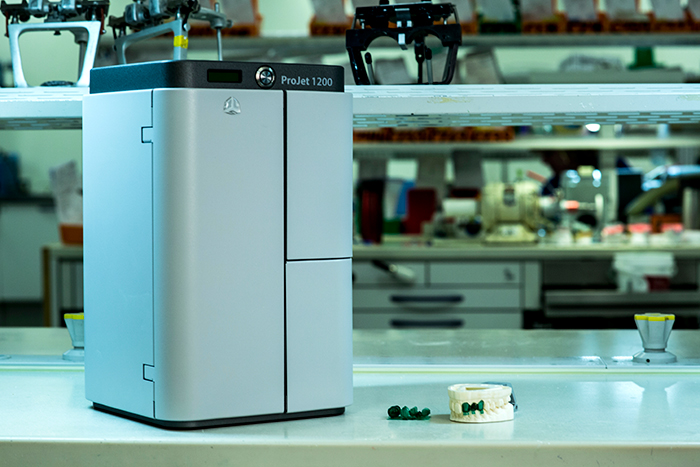 The jury may still be out on whether it makes commercial sense to offer 3D printers as part of your core print portfolio, but there’s no getting away from the fact that the 3D revolution is well underway.

Market analysts all agree that as pricesn fall 3D printing is going from strength to strength. Gartner’s latest forecast is that 3D printer shipments will more than double every year between 2015 and 2018, by which time worldwide shipments are forecast to reach 2.3 million. Canalys estimates that nearly 133,000 3D printers were shipped worldwide in 2014, 68% more than in 2013.

Canalys Research Analyst Joe Kempton said: “We have seen improving print speeds, a wider range of materials and new forms of additive manufacturing methods. There has also been a substantial increase in the number of vendors entering this space, with many coming from Asia, challenging the previous dominance of 3D printing hotspots such as Germany and the USA.”

He points out that Chinese and Taiwanese vendors, such as XYZPrinting, have been particularly successful at creating consumer-friendly 3D printers at impressively low price points, adding that many 3D printing companies have begun to ramp up spending on research and development to prepare for HP’s move into the market in 2016.

This year, IDC expects spending on 3D printing to go up by 27% to over $3.4 billion. It predicts that by 2020 more than 10% of all consumer products will be available as produce-on-demand via 3D printing in the home or through companies offering such services.

Pete Basiliere, Research Vice President at Gartner, believes the 3D printer market is at an inflection point. He said: “Unit shipment growth rates for 3D printers, which languished in the low single and double-digits per year in the 30 years since the first 3D printers were invented, are poised to increase dramatically beginning in 2015. As radical as the forecast numbers may seem, bear in mind that even the 2.3 million shipments that we forecast will be sold in 2018 are a small fraction of the total potential market of consumers, businesses and government organisations worldwide.”

Basiliere added: “Manufacturers will strive to add features and improve performance in the first few years rather than reduce the prices of printers. Therefore, the average selling prices (ASPs) of a few technologies are expected to increase or decrease gradually in the outer years, after an increase in 2014 or 2015.”

Directed-energy deposition printers are the most highly priced, followed by powder bed fusion printers. “The ASPs of material extrusion and vat photopolymerization printers are expected to decrease as more and more players enter the market with offerings in the lower price bands within these two technologies,“ he said. Meanwhile manufacturers are pulling together to improve the 3D printing process for end users.

According to a report on 3DPB.com, during 3D Print Week in April, J Scott Schiller, Worldwide Business Director of Hewlett-Packard 3D Printing, referred to a new consortium that would bring together large players, including HP, to work together on streamlining the 3D printing process on everything from a $500 desktop machine to a $500,000 industrial scale printer. 3DPB.com also reports that Microsoft plans to bring out a new file format specifically for 3D printing.

Not surprisingly, traditional print vendors have become increasingly active in the 3D print market, sometimes as OEM suppliers of 3D printheads but more commonly as an additional route to market.

HP plans to launch 3D printers based on its PageWide printing technology next year and, in September 2014, Ricoh launched a new additive manufacturing business Ricoh already has an established 3D print head manufacturing operation, acting as an OEM for a number of 3D printer manufacturers, and is now broadening its 3D printing strategy to include research and development into 3D printing technologies and applications. In Japan it has opened two Ricoh ‘Rapid Fab’ facilities offering 3D print services to customers.

In January, Ricoh became an official reseller of Leapfrog 3D printers throughout Europe. It will initially focus on customers in the education sector, providing a complete support package including consultation, installation, training and the ability to add 3D printers to an existing Ricoh imaging print service contract. In time, Ricoh plans to extend support to customers in the engineering and manufacturing sectors.

Last year, Konica Minolta Business Solutions USA signed a distribution agreement with 3D Systems, becoming the first printer manufacturer in the US to sell, support and service 3D printing products through traditional printer and office equipment channels. As yet, there are no plans to replicate the arrangement on this side of the Atlantic.

In the UK, 3D Systems has distribution agreements with KYOCERA and Canon. KYOCERA is offering CubePro and ProJet printers, 3D scanners and the full range of Cubify software to enable users of all abilities to realise their projects. It also plans to make 3D printing ‘office friendly’, with out-of-the-box Green Button Training for users. The CubePro family was created for the education market and offers Plastic Jet Printing (PJP) ideal for schools and small businesses, while the ProJet Colour Jet Printing range is suitable for R&D, universities and small production requirements.

KYOCERA Product Marketing Manager Trevor Maloney said: “3D print is being viewed increasingly as a must-have print product. We now offer our partners and end users one of the most comprehensive 3D portfolios in the UK, backed by excellent technical support and customer service, which means they can be confident about 3D.”

Canon is focusing on 3D Systems’ advanced manufacturing 3D printers, including the ProJet 1200, 3500, 4500, 6000 and 7000 series. It is offering the printers to customers in the engineering, manufacturing and architectural market segments for prototyping and rapid product development. Initially, the printers will only be available through Canon’s direct sales business.

Made in the UK

Both models can use a variety of different materials including PVA, ABS, Wood and a soluble PVA for support structures and feature a unique smartchip mechanism that identifies filament levels and ensures the correct material is used. Proprietary Helpful Printer Driver software provides real-time accurate filament levels for convenient consumables reordering.

3D printers have received a mixed reception from dealers. Matt Goodall, Service Director at Office Evolution, said that they have monitored the very rapid development of 3D printing and it is clear that it has a place, but the decision as to whether this is an option for office equipment resellers is still to be answered.

Vision first launched 3D printing at its half-year sales conference last April. Operations Director Mark Smyth said that, as a provider of printing technology and a specialist reseller in print, Vision must consider 3D printing. “Whilst it’s still somewhat of an unknown, you cannot afford to overlook what could potentially be the next best thing in print,” he said.

Balreed has seen a small rise in enquiries from clients, most of whom simply want to gain a better understanding of the technology. Printerbase definitely believes 3D printing will be an option. Founder Peter Knight says it is an area of the business that they are already having success with. In contrast, 1st Office has come to the conclusion that apart from the word ‘printing’ there is no similarity with its traditional core printing products.