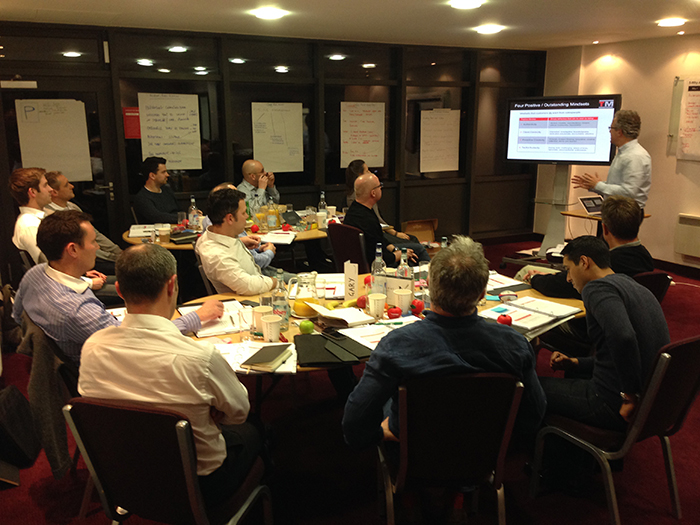 Since he joined Toshiba as Head of Channel six years ago, Carl Day has used education and personal development for competitive advantage, as a means of differentiating Toshiba from larger, better resourced competitors – at least as far as the channel is concerned.

“When I came to Toshiba I thought I can’t take on the Canons, Ricohs and Xeroxs by trying to beat them at their own game. Those brands had greater recognition in the industry; were much more established; and had a much bigger marketplace. I didn’t have the financial resources to take any of that away, so we adopted a very different approach and focused on education programmes to help our dealers grow,” he explained.

One of Day’s first actions was to introduce a management training programme for the channel, which involved three days of training with the Royal Marines where participants learnt the value of contingency planning and other military skills that could be applied in the world of business.

The success of that initiative strengthened Day’s conviction that sales engagement in the print industry could be enhanced by education – a belief that four years later led to the establishment of the Toshiba Masters programme implemented in conjunction with training company Consalia and Middlesex University.

The first cohort of Toshiba dealers to go through that programme, Day among them, has just completed the course and submitted their final dissertations. Their experience supports Day’s belief in the value of education and the benefits of exploring new ways of thinking.

“From a business perspective the results have been spectacular,” he said. “We have been measuring the sales performance of dealers on the Mastersand over the last 12 months they have outperformed our other dealers, with a 75% increase in dealer unit sales compared to a 35% increase among nonMasters dealers.

Day is already using what he has learnt to transform the way Toshiba engages with the channel and, hopefully, the way Toshiba dealers engage with their customers, via a new B2B engagement model, the Joint Goals Actions and Objectives (JGOA) plan, which he introduced to Toshiba channel partners at the company’s dealer conference in November.

“JGOA is a B2B engagement model with a different approach. I don’t walk in and say ‘I can save you money’; I don’t walk in and say ‘I work for Toshiba and we are the best’. Instead, I say ‘What are your 1, 3 and 5 year goals?’ That’s all I want to know. The JGOA process I’ve designed will show whether I can help you achieve those goals, whether through being a partner with Toshiba, you can achieve your goals via a set of objectives and actions that are measurable, relevant and transparent.”

Day says that the advantage of the JGOA approach is that it is cyclical rather than linear and that by constantly reinventing itself and generating new ideas it overcomes people’s resistance to familiar sales techniques. For this reason, he believes the methodology will also be very effective at helping Toshiba dealers win new business.

“More than 95% of the companies that make up the channel are started by successful sales people,” explained Day. “By their nature, they are very sales-focused. They approach business generation and client engagement in a very similar way, using a linear methodology based on identifying a problem and handholding a customer to a solution.”

Because most sales training is passed down from an experienced sales person to a junior sales person, Day says that dealers are being taught techniques that might have been successful 20 or 30 years ago, but are no longer effective today.

“One of the metrics that always shocks me is the number of phone calls in our industry that have to be made to get one appointment. Depending on who you listen to, you are looking at several 100 phone calls to get just one appointment. Yet, everyone has a requirement for print. This must mean that sales people are not engaging the client in the right way,” he said.

To find out where sales people were going wrong, Day commissioned a Professor at Loughborough University to analyse sales calls and identify which words and behaviours generated a positive or negative response. From a tranche of 200 calls – none of which resulted in a sale – she concluded that a) sales people are very bad at reading the signs (or choose to ignore them) and waste time on calls that will never result in a sale; and b) that the language they use is ineffective.

“If a sales person picks up the phone and say my company is X, Y or Z and I can save you money – how can you know? How can you possibly know that you can save me money? The person on the other end of the line loses trust in the sales person, because they think ‘How do you know? You don’t know me or my business’,” explained Day.

Day says that this type of sales approach creates a lack of trust between buyers and sellers that tarnishes the reputation of the sales profession and doesn’t reflect the reality of most customer engagements.

“For my dissertation I asked people to rate a number of professions by trust – teacher, accountant, lawyer, nurse and sales person. Every person I interviewed put sales person last. I then asked, of all the sales people you deal with, where would you rate a copier sales person in terms of trust? Everyone put them at the bottom. What was interesting was that when I asked the same question about their existing supplier, the score was much higher,” he said. Day then analysed what it was about the behaviour of sales people that caused such mistrust.

“One thing that came up a few times is that the buyer would say ‘I hate it when I can’t work out what I am paying, when all the costs are hidden; that makes me mistrust a salesman even more’. But when you ask a sales person why they hide the costs, they say ‘Because I don’t want them to drive the price down’. One behaviour drives the other. One side has to take the lead and change the way we behave,” he said.

JGOA is Day’s answer to this conundrum – a methodology that allows both parties to build a trusted relationship from the outset. For Day, It is also validation of the Masters programme.

“This is what the university calls the ripple effect of learning. What I have learnt will have rippled out to my team and will have had a positive effect on my peers and on stakeholders that deal with us. That was my desire, my hope for it – that the learning would change the thinking of our channel.”

Day describes the Masters programme as Toshiba’s ‘crown jewels’ – its Tier One partner programme – adding that its success has created an appetite for further channel education programmes.

“We are looking at a single-year sales person development programme, which covers the sales part of the education. We have done courses on digital marketing and online marketing, and are now looking at running PR workshops for our dealers addressing how they promote themselves and their brands,” he said.

In the meantime, a new cohort of Toshiba dealers has just started the Masters programme, which for the first time will include participants from other industries to provide a different perspective. At a cost of about £28,000 per student, the course represents a significant investment for dealers, even if subsidised by Toshiba. But for Day the investment in time, money and effort is well worth it – “Everyone is seeing a return on that investment,“ he said.