GDPR ready (or not)

The IDC report, 2018 Worldwide SMBs GDPR Ready (or Not) in Seven Countries examines the awareness, activity, and expectations of small businesses (10-99 employees) and midsize firms (100-999 employees) with regard to the European Union’s General Data Protection Regulation (GDPR).

The GDPR, scheduled to take effect May 25, 2018, establishes strict requirements for the way that personal data must be governed and protected – including encryption and protection of anonymity. These requirements must be met for every citizen of the European Union, regardless of the geographic location of the company holding this information. Potential penalties for failing to meet these requirements are severe – up to 20 million Euro or 4 per cent of annual revenue for non-compliance – making this what should be a high priority issue for businesses of all sizes and locations. 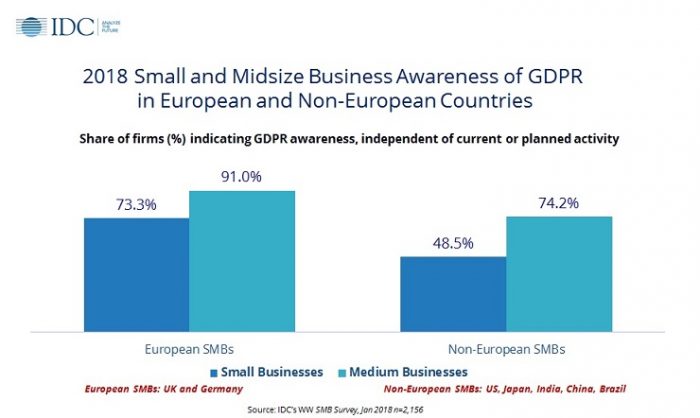 The January 2018 survey of more than 2,000 business owners, line of business leaders and IT leaders aware of or managing IT spending in seven countries found that less than half of European small and midsize businesses (SMBs) have taken steps to prepare for the pending GDPR. Among non-European SMBs, the share of prepared firms is significantly lower.

“As SMBs around the world increasingly look to grow revenue by reaching out to new customers, the importance of global expansion increases,” said Raymond Boggs, Program Vice President, Small and Medium Business Research at IDC. “But so does the need for first-rate security and data protection, which is why GDPR compliance is important, not just to avoid fines, but to insure that vital customer information is secure and protected.”

Despite the potential consequences of failing to comply with the GDPR, IDC’s survey found varying levels of awareness, planning, and preparation among SMBs.

Key findings from the survey include the following:

“Nevertheless, Western European companies are struggling to meet an imminent deadline, and this is more likely for small and medium companies. In addition, there are also misunderstandings and misconception issues that compromise on-time compliance,” La Croce added.