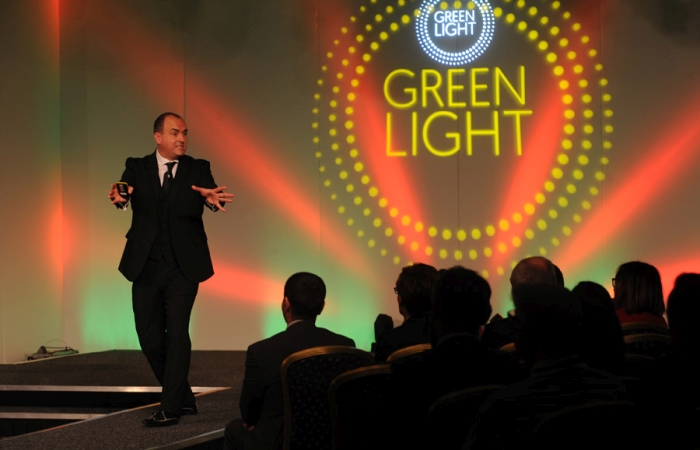 From Carpool Karaoke to Family Fortunes, VOW’s fourth edition of its Green Light event, which took place December 7 at the Hilton Metropole in Birmingham, didn’t leave delegates expecting any more

Over 300 resellers joined the wholesaler at the 2017 ‘Expect More’ conference which also attracted 70 supporting exhibitors across all key product categories. The day began with a light hearted look at Managing Director Adrian Butler, National Sales Director Martin Weedall, EVO Group CEO Steve Haworth and guests’ ‘journey’ to the venue. The ‘awesome conference mix’ Carpool Karaoke complete with fancy dress, put even the funniest of James’s Corden’s efforts in the shade!

In his opening address, Managing Director Adrian Butler said that the wholesaler had listened to what its resellers had said throughout the year and promised that in 2018, its customers could expect more. VOW’s focus for next year will comprise three key elements: creating opportunity, helping its resellers to sell more products and drive sales; improving customer experience and delivering innovation, every day.

In 2017, the wholesaler invested £1 million to drive growth in key categories. It added ten new people to the team and introduced 1,200 new products on the conveyor, an initiative that enables it to bring a new product to market within ten days. Butler also cited the launch of exclusive brands confirming there would be more to come next year; a 16 per cent growth in FS, 25 per cent increase month on month in furniture, Venture partner events and the launch of a battery recycling scheme, as other highlights.

Rather than talk about the P&L and crunch the numbers, Evo Group CEO Steve Haworth provided clarity around the Group’s restructuring which now puts the customer at the centre. “We were the Evo Group,” he said, adding: “We’re now the Evo group of companies.” He said that whilst the historic model of segmented sales and shared group business functions worked from a corporate perspective, it didn’t have the customer at its core. “What this means is that full control and accountability is now with VOW,” he said.

The agenda was lighter than last year, leaving delegates more time to network with peers and engage with suppliers at the ‘Live Well, Work Well’ exhibition, where more than 70 exhibitors including headline sponsors ACCO, Bic, 3M and VOW Interiors, promoted new products and the latest innovations to help resellers kick start plans for 2018.

The speaker line-up included Nigel Risner, one of only six UK-based recipients of the Award of Excellence from the Professional Speaking Association. He warned that success won’t come if you keep doing things the same way. His advice was to create IMPACT, leaving the audience with six takeaways: ensure if you’re in the room, be in the room; model on the best; have passion and partnerships and take action; he also stressed the importance of communication and trust.

Returning keynote speaker Geoff Ramm, spoke about OMG (observational marketing greats) marketing, his delivery was both entertaining and inspiring. Making the point that, to become memorable, they must stand out from the competition, he told the audience ‘when you’ve got something to say, shout it from the rooftops and when you’ve nothing to say – then shut up’!

Rounding off the presentations Risner and Ramm, jointly delivered an interactive session entitled The Perfect Day.

The Green Light Gala Dinner and Awards ceremony was held in the evening. Special guest host Vernon Kay, compèred a Family Fortunes-style game, with two teams of resellers and VOW staff battling it out to win, he also delivered a DJ set at the after-show party.