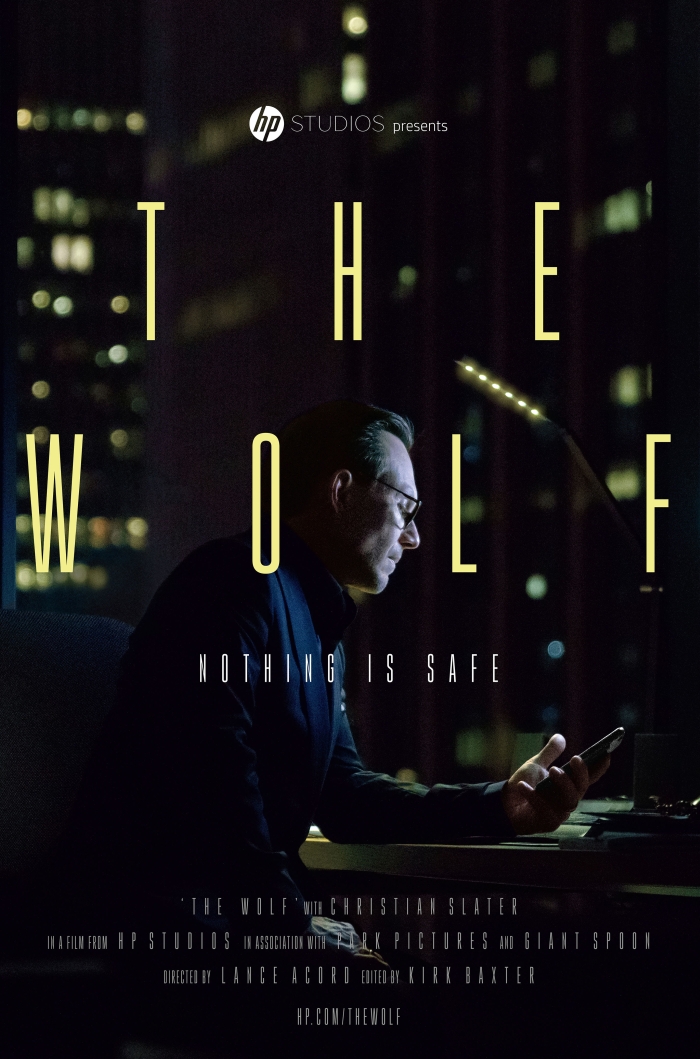 HP has teamed up with actor Christian Slater for a new, branded short film series called ‘The Wolf’, an initiative designed to elevate awareness of the security risks facing businesses and consumers

The HP Wolf web series global campaign forms a key part of the new ‘HP Secure’ call to action. It kicked off with award-winning actor Christian Slater and the premiere of the newly launched HP Studios’ web series, The Wolf, highlighting how corporate networks can be hacked and what companies must do to protect themselves.

The Wolf is directed by BAFTA and Emmy nominee Lance Acord and edited by Academy Award winner Kirk Baxter.

In the series, Slater systematically hacks a company – from the mailroom to the boardroom – through overlooked vulnerabilities and poorly secured printers and PCs. This first instalment reinforces that security is no longer just the responsibility of the network or something at the perimeter, but it’s a concern for everyone.

“Hacking is a serious and growing problem for businesses and consumers. When HP asked me to partner on this series, I thought it was a great opportunity to help educate the public about how to better protect against cyber-attacks,” said Christian Slater.

“As the universe of connected devices grows exponentially, so does the sophistication and magnitude of cyber-attacks. Securing devices, data and identities is an imperative in driving continued confidence in technology and with whom and with what we choose to connect,” said Antonio Lucio, HP Chief Marketing and Communications Officer. “HP is leading from the front to continually make meaningful progress in securing the future of computing, and The Wolf is a creative way to raise awareness of this growing challenge for companies.”

Over the coming months HP will be elevating its commitment to reinvent security through a broad range of partnerships, events and product innovations for the most secure devices, solutions and technologies.

“Christian Slater’s ability to play a charmingly sinister hacker, combined with his popularity in the cybersecurity world, make him the perfect partner to expose security issues that leave businesses vulnerable to attacks,” Lucio added.

The printers in today’s enterprise environments are as sophisticated as any computing device,” said Vikrant Batra, Global Head of Marketing for Imaging and Printing. “Hackers can pull data from a printer’s hard drive, or get access to your company’s network. And how many times have you walked by the printer and seen printouts with sensitive information just sitting there?”

He continued: “Securing devices, data and identities is a critical concern for everyone, everywhere. At HP we are committed to meaningful progress in securing the future of computing. Making the world HP Secure. The Wolf is a call to action to raise awareness.”

“Networked printers can no longer be overlooked in the wake of weakening firewalls to the growing sophistication and volume of cyber-attacks,” said Ed Wingate VP & GM, JetAdvantage Solutions at HP, Inc. “That’s why HP has established a new benchmark in managed print services, infusing security best practices into everything that we do to enable our customers to stay on top of growing endpoint security challenges.”

Reduced burden on IT

HP added new implementation and professional services to HP Secure MPS so that companies can outsource and improve their security profile while saving valuable IT resources.

The new services and capabilities include:

HP will help meet compliance via new remote management of security settings as well as monitor the print fleet for potential issues and supply proof of compliance reporting on fleet security status.

HP has invested to raise the level of security expertise with MPS employees and HP technical teams with industry security certifications such as CompTIA.

HP is embedding security into MPS tracking and reporting processes for greater visibility to the print fleet status and to review security best practice recommendations.

New tools within HP MPS software automate security actions such as firmware updates and password management, so companies can outsource tedious IT security actions as part of the MPS contract.

HP has started to ship printers with less-secure interfaces closed, requiring customers to open the ports and protocols if they are needed when deploying new printers on their network.

The company is now closing older, less-maintained interfaces including ports, protocols and cipher suites as identified by NIST as less-secure including FTP and Telnet. With its November FurtureSmart firmware update, it has improved admin password and encryption settings for both new and existing HP Enterprise printers and MFPs.

HP is also actively working with software developers to modify their applications to utilise newer, stronger interfaces in order to close additional interfaces in the near future.

HP JetAdvantage workflow and printing solutions have been developed to streamline crucial business processes and tasks for enterprise customers leading to reduced IT workload and costs, improved employee productivity and enabling users to print securely.

The latest security enhancements include: HP Access Control which provides authentication, authorisation, and secure pull printing capabilities, now with improved functionality and support for SNMPv3, a new card reader compatible with HIP2 that expands card type compatibility, and the ability for users to login and logout with a simple swipe of a proximity card or smart card. And HP Capture and Route which makes it easy to control and track scanned content and distribute documents with the touch of a button. New features include support for LDAP over SSL, data at rest encryption for scanned data stored on the Capture and Route server, and MyMessages, allowing for immediate printing of user messages and faxes while standing at the MFP.