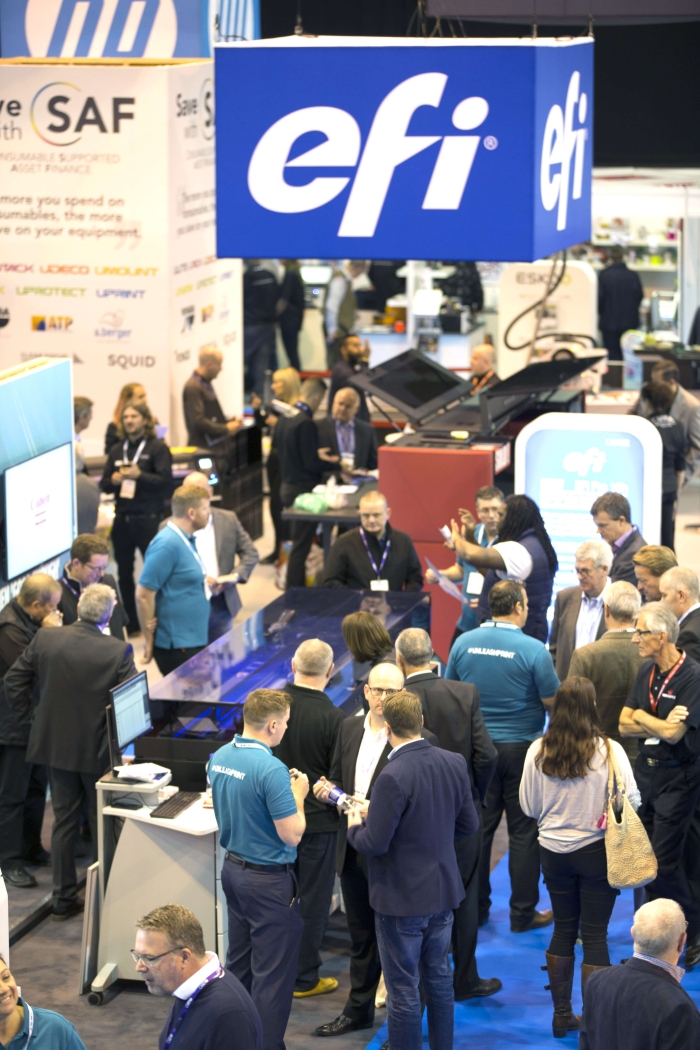 As PrintIT Reseller went to press, visitors were lining up to attend The Print Show 2018 which took place September 18 to 20 at the NEC in Birmingham, here is a preview of what guests could expect

This year’s event was the largest ever edition of the exhibition, with more ﬂoor space and exhibitors than ever before, causing the show’s organisers to relocate to a larger hall due to demand for stands.

The Print Show 2018 saw a number of leading brands that have supported the event for a number of years once again showing their wares. Epson has enjoyed a presence at the show since its launch in 2015, while the likes of Konica Minolta, Vivid Laminating Technologies, Morgana and RISO are also long-term backers.

HP, which enjoyed a hugely successful debut at the 2017 show also returned for the 2018 edition, while Hybrid Services was also on hand, featuring wide-format kit from Mimaki.

The show also played host to some of the leading suppliers and distributors in the UK market including CMYUK, printMAX, Signmaster Systems and Colourbyte.

Chris Davies, Event Director for The Print Show, said: “The fact that so many leading brands have confidence in the event and continue to support us year-on-year shows just how important the show is for the UK market.”

Konica Minolta, one of many returning names at The Print Show this year set its sights on ‘innovation’ at the event. Elsewhere, Xeikon was set to demonstrate how its technology can be used to produce commercial print, labels and packaging work. Xeikon’s focus was to highlight how the ‘possibilities and synergies’ of its digital print production solutions are continuing to expand under its ownership by the Flint Group.

The Xerox Iridesse took centre stage on the Xeretec stand – the first in the UK to showcase the new press, Featuring alongside the Iridesse, was Xerox’s Versant 180 and the Versant 3100, highend production devices. Visitors to the show were able to learn more about the performance, reliability and versatility that have made this ﬂexible device so popular among the print community. The latest solutions from Xeretec’s key partners including Antalis, EFI, Infigo and XMPie were also on show.

Duplo International, which took one of the largest stands at The Print Show 2018, launched a range of new finishing kit. At the centre of the Duplo stand were several new products including the DC- 516 Cutter Creaser, the PFI-2100 Binder and an updated iSaddle X Saddle Stitcher.

Another finishing brand in the form of Watkiss Automation used the event as a launch platform for its new PSQ160-WH hand-feed booklet maker, the latest addition to its PowerSquare range. In addition, finishing specialist Renz unveiled the new F400 HD Cold UV Coater in partnership with Argos Solutions.

Aside from this showcase of the best in printing and finishing technology, The Print Show once again featured a series of special, free-to-access features to help visitors get the most out of their visit.

The Traditional Print Masterclass, Printers’ Bazaar, Business Seminar Theatre and Software Training Theatre all returned this year, with visitors able to attend each area without the need to book. In addition, visitors also enjoyed a brand new feature in the form of ‘Park Life’ which was designed to help dispel conceptions that print and paper are bad for the environment. Here, visitors could take a break from exploring the show ﬂoor and enjoy a rest in seating areas located under a canopy of trees.

One of the most popular show features since the event debuted in 2015, the Traditional Print Masterclass offers a glance into print’s past, with visitors able to view printing techniques that have helped to shape the modern industry, as well as produce their own work to take away as a souvenir.

The Business Seminar Theatre featured a series of expert speakers, delivering presentations on some of the major talking points in print. The Software Training Theatre provides the need-to-know information for the top software products in the industry and educate visitors about how they can best use these to enhance print output.

This year, the Printers’ Bazaar featured six specialist areas designed to offer an insight into major growth markets across print.