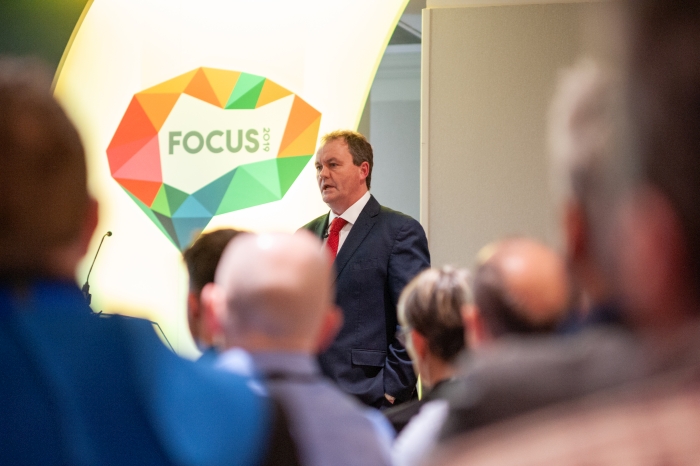 Designed to encourage dealers to focus on future-proofing their businesses and capitalise on the many business opportunities available to them, the 2019 National Conference opened with an insightful keynote address from Integra CEO, Aidan McDonough.

In his presentation entitled: Focus Your Business for Greater Success , McDonough stressed the importance of resilience in an environment that he said: “Feels like nothing has changed, when in fact, everything has changed.”

He spoke about the way technology has enabled always-on instant communication and instant access to more products and services which has shifted the balance of power. “Consumers are now demanding faster and better customer service and price visibility on every product is driving down margins. The political uncertainty and volatility in exchange rates is also challenging. It’s a tough space to operate in,” he said, adding: “The independent sector is resilient, successful and able to adapt. It’s not easy to change, but it is a necessity.”

Despite all of the above, McDonough believes there are still many opportunities for continued growth. Integra is helping members to capitalise on these through a number of added-value services designed to help members diversify into categories such as Workwear, PPE, promotional merchandise, education, packaging and medical supplies – all of which are forecast to grow. Another key addedvalue service – i-merge – aimed at Dealer Principals looking to either buy or sell a dealership, has brought many likeminded businesses together and resulted in the successful completion of twelve deals over the past year.

In just a few minutes, Steed demonstrated just how easy it is to become a victim of cyber-crime. He conducted a very simple, live Google search which revealed a list of a company’s systems and passwords. The point he made was that everyone is a target. “No-one is immune, the fact that huge institutions with sophisticated and massive resources such as the NHS, LinkedIn, NASA or the CIA have been attacked means you should be more aware of the threat,” he warned.

During this session he presented some alarming statistics from a March 2019 YouGov study which made the audience sit up and take note. He took delegates through a number of commonplace attacks such as phishing emails, ransomware and social engineering; when asked if anyone had fallen prey to any of these, there was a large show of hands.

Industry veteran Robert Baldrey spoke about uncertainty outside; citing Brexit, the general election, artificial intelligence and the potential loss of jobs where people rely on traditional office products, as well as the fact that half of UK retail sales are predicted to be made online within ten years compared to the current level of 20 per cent, as some of the major pressures facing the channel today. Moving on to the uncertainty inside, he talked around dealer consolidation, mergers, declining prices and margin pressures, and the rise and rise of Amazon Business.

After painting what looked to be a dire picture, he presented a number of actions that dealers can take to future proof their businesses and ensure they continue to thrive in a climate where the only certainty is uncertainty.

A focus on sustainability Steve Malkin, CEO of Planet First opened his inspiring session referencing the growing demands on businesses to take action against climate change. He said that he sees sustainability as a business opportunity, one that provides positive economic, social and environmental impacts.

“Businesses that have environmental protection firmly on the agenda, can save money, enhance their brand, attract and retain talent, win business and above all, do the right thing,” he said.

He urged members to unlock the business opportunity and to adopt a sustainability strategy with purpose at its core, a move that he said will help them outperform the competition and better align with customers’ own strategies by offering them sustainable products and services.

“50 per cent of people want to see more radical action on climate change,” he said, adding: “We have ten years to combat this pressing issue.” In January 2020, Planet Mark will launch a ‘Decade of Action’ campaign which will involve asking UK organisations to lead the world as we enter the most important ten years of the climate crisis. “This is an opportunity to tackle the climate crisis and you could be part of the solution providers,” Malkin concluded.

Antalis’ Tim Percival hosted an afternoon workshop where he explored the opportunity for innovation and increased profits in the declining paper market.

Members took full advantage of the opportunity to engage with all of the suppliers who attended, to talk through new products, promotions and special offers, as well as network with their peers. Almost every exhibitor had a range of special show-only deals, competitions and free prize draws on stand and lots of deals were done on the day.

Celebrity guest
This year’s guest speaker was former Royal Marine Commando and Special Forces Sergeant, Jason Fox, who closed the day with a powerful, poignant recap of his time in the forces, culminating in a Q&A session.

Fox delivered a powerful keynote session. Through sharing a detailed recap of his own experience during his final tour in Afghanistan, he demonstrated the importance of planning and developing effective strategies to achieve the best outcome.

As his story panned out, it became clear that good leadership and success is also dependent on the ability to flex and adapt when you are thrown a curve ball. He spoke about the need for emotional resilience as well as the importance of debriefing, making the point that it is only by reviewing and analysing events that you can identify ways to improve for the future.

Gala dinner
During pre-dinner drinks, artists from Musicians Inc and the Electro Swing Project mixed and mingled with guests; magicians, stilt walkers and dancers, provided a taster of the circus and cabaret-themed after dinner entertainment to follow.

After a three-course dinner, Britain’s Got Talent semi-finalist and Magic Circle Stage Magician of the Year (2016), Sebastian Walton, took to the stage. Having already performed some up-close table tricks during dinner which went down a storm, his magic act on stage included some mind blowing tricks that kept guests entertained and astonished. His hilarious rendition of YMCA with selected members of the audience bought the house down!

Next up was Musicians Inc and the Electro Swing Project – a group of talented artists who performed a ‘Greatest Showman’ themed show, bringing together dance, music and circus acts in a thoroughly enjoyable finale.

During the gala dinner, Integra, members, suppliers and guests once again demonstrated their generosity, donating an amazing £1,500 to charity. The monies raised will be split between two very deserving charities, Save the Children and Help for Heroes.