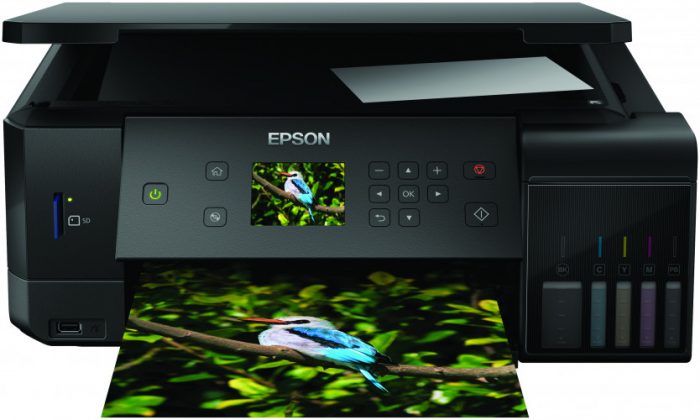 Epson is famous for its piezo inkjet technology. Clark explains how the company is developing the technology to ensure it continues to meet customer needs. “Over the last two or three years, maybe slightly longer, Epson has been challenging preconceptions about what inkjet printing is and is not capable of,” he said.

In the consumer marketplace, Epson launched a product called EcoTank – a new version of which was recently launched at IFA – with the intention of turning the business model on its head. Rather than selling low priced hardware and then recouping money over the lifetime of the product through cartridge sales, Epson charges more upfront for the hardware (which comes with extra-large ink tanks containing up to three years’ worth of ink) and charges very little for replacement ink.

“In the office market, which has traditionally been dominated by laser technology, we have taken the high quality, high precision printhead used in our commercial devices and incorporated it into office devices. Unlike a consumer printer, which has a printhead that moves back and forth across the page, our PrecisionCore technology combines multiple heads in a fixed array spanning the width of the page. The only thing that moves is the paper, which is how we can achieve such high print speeds, and the quality is assured because we use high end commercial technology,” Clark said.

On the consumer side, the market for ink cartridge products is reasonably flat, but where Epson is seeing growth is with its EcoTank product. “This new business model seems to have caught the attention of a lot of people and, so far, we have sold about 20 million of these products globally. It answers a lot of the questions that were asked about inkjet technology and the inkjet business model,” he stated.

At the start of the year, Epson extended its business inkjet concept to the enterprise market with the launch of its WorkForce Enterprise MFPs. “We are very new into the business marketplace and, to date, we have been selling into the lower end of the business market. But now, with the introduction of the WorkForce Enterprise series, we have an enterprise-level multifunction device that will allow us to take more of that office space. There are two versions of the Enterprise product, a 100ppm version and a 75ppm version, and you can specify it as a standalone product or with a finisher,” Clark explained.

Opportunity in the office market

“I could see some growth potential in projection and in emerging territories, but by far the biggest opportunity lay in the office marketplace. IDC projects that market to be worth around 38 billion euros in EMEA. If I can’t generate a reasonable amount of revenue from a 38 billion euro market, there’s something wrong,” he added.

Clark said that Epson’s biggest expectation is that the office print market will shift from laser to business inkjet technology. “Because business inkjet, as well as delivering the same commercials as laser – cost per page, total cost of ownership, that kind of thing – has a strong ecology message, with big reductions in CO2 and the amount of waste that’s produced,” he said, adding: “These aren’t small reductions of five per cent, 10 per cent; they are significantly different – a 92 per cent saving on waste, a 94 per cent saving on CO2.”

Interest in the ecological benefits of business inkjet does vary from country to country. “Germany is very sensitive to ecological messages, the UK less so. However, that is changing. The fact that we can deliver such a big energy saving has an ecological benefit, but people also recognise that it will help them reduce their energy bills. If you’ve got one printer, it’s probably not going to make that much difference, but if you’re running a fleet of printers, which a lot of our customers are, then it starts to make a significant difference,” he argued.

Epson showed a number of new business inkjet products at the IFA 2017 exhibition in Berlin, including a new generation of EcoTank printers. “The main differences are, firstly, that the ink tanks are now on the front, so you can see the ink level from the front of the printer – a little bit more convenient than having them on the side – and, secondly, they are easier to refill,” Clark said.

“Before, replacement ink came in bottles with a pointed nozzle: you had to remove the seal, put on the pointed nozzle and then squeeze the bottle to get the ink into the tank. If I’m honest, it’s a little messy. With our new printers, there is a keying system, so you definitely can’t put the wrong colour into the wrong tank, and a valve mechanism, which opens automatically. The ink automatically flows into the tank, so you don’t need to squeeze the bottle, and when the tank is full it stops, which makes refilling a lot easier. We always listen to feedback from customers and, out of all the feedback we got, refilling was the one thing people really wanted us to change,” he continued.

Clark said that when Epson launched the EcoTank product, its expectation was that this would be purchased by high print volume customers. “Because turning the business model on its head means that initially you do pay more for the hardware, which you then recoup because the cost per page is so much lower,” he said.

“But, in reality, we’re seeing a broad spectrum of user, because EcoTank’s appeal is as much about the convenience of low intervention as it is about running costs. You still get more customers at the higher end, but take-up is across the market.”

He added: “We do a similar concept for the business marketplace that we call RIPs. These devices have replaceable ink packs with enough ink for up to 86,000 pages in each bag, so for a year or so the only thing the customer has to replenish is the paper. RIPS brings the same experience you get with EcoTank to the office market. It really is a low intervention product.”

Epson also launched a new service called ReadyInk at IFA 2017. Clark explained that what Epson is trying to do in the consumer and SOHO markets is to provide a number of different ways for customers to acquire its inkjet printers. “You can buy low cost hardware and go to a store to buy replacement cartridges; you can buy an EcoTank device, with a higher upfront

cost and low cost per page; or you can buy the low cost hardware and use it with monitoring software that automatically sends a replacement cartridge when ink levels get low so you don’t have to go to a shop to buy supplies,” he explained.

“The ReadyInk pay-as-you-go print service is another way to eliminate the inconvenience of running out of ink. You can buy into the EcoTank concept or you can go for a convenient, automatic cartridge replacement service,” he added.

Clark said that in the 25 years he has been working for Epson, the Paperlab recycling and paper-making machine has generated more interest than any other product the company has announced.

“People are really interested in the whole idea of closing the loop. Currently, we’ve got beta test sites in Japan and the plan is to bring it into Europe next year,” he said, adding: “At the moment, the device is still very large, so if all you’re interested in is recycled paper it’s probably not the unit for you – you can go to the market and buy recycled paper cheaper than you can make it on this device.”

He continued: “But there are two instances where we’re seeing real interest: the first is where an organisation wants to demonstrate its environmental credentials and the second is around security.

“Because Paperlab shreds used paper down to fibre level, anything that’s printed on it is completely eradicated. You can imagine the value of that for public authorities, hospitals, banks, legal companies, anybody that needs securely to dispose of customer information.

“There’s a lot of discussion about the management of personal data online; this, if you like, is the offline version of that. The plan is eventually for Paperlab to be the same size as a WorkForce Enterprise, or even smaller. In the future, Paperlab will sit next to a WorkForce Enterprise, closing the ecosystem within a department and not just the building,” he said in conclusion.