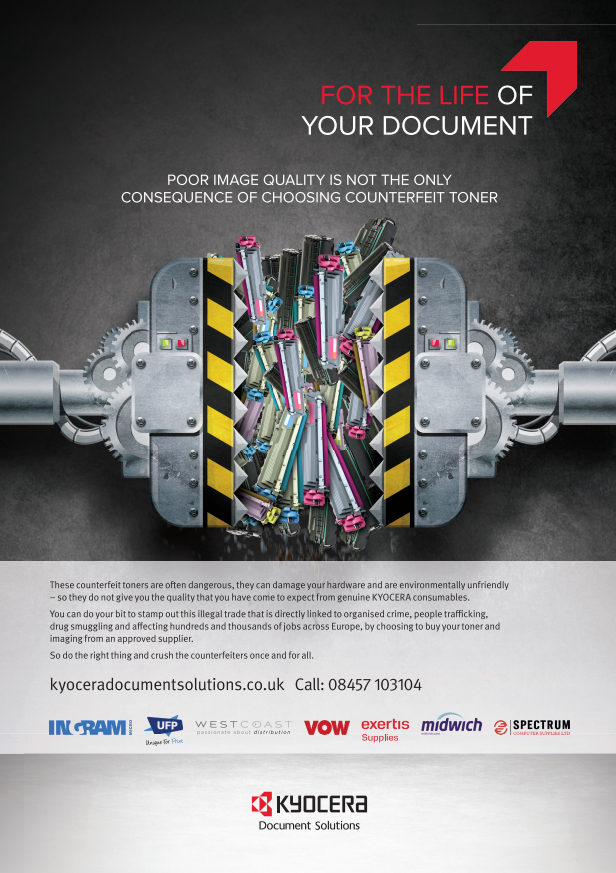 KYOCERA Document Solutions, one of the world’s leading document solutions companies, has launched a campaign to educate customers and partners on the risks incurred by buying counterfeit consumables.

The move comes as KYOCERA reveals that it has seized fraudulent goods worth in excess €5m since April, the beginning of its financial year. This points to a concerning rise in the scale of the problem, with the previous financial year having seen the seizure of more than 100,000 units, worth in excess of €10m.

“Counterfeit imaging supplies are often dangerous, environmentally unfriendly and cheat consumers of the quality they are entitled to expect from branded consumables,” said Jonathon Robbins Consumables & Spares Sales Manager of KYOCERA Document Solutions UK. “It’s time to take the fight to the criminals, and stand up for resellers and businesses who are being duped into buying sub-standard products, often in good faith, by increasingly organised criminals.”

With the wrong toner and inkjet cartridges you should expect a range of common issues, such as streaky grey backgrounds, drop off, uneven print quality and even ghosting on the page (bits of the previous page making an unwelcome appearance). More serious, and costly, are the risks of damaging the product. Non-genuine toner or ink damages good-quality printing products and reduces the overall yield of the machine. This means that the total cost of ownership of the device is increased, offsetting any short-term benefits of the cheap toner. In addition, this could invalidate the manufacturer’s warranty, meaning if your machine breaks, which it may well do using counterfeit consumables, you have no comeback.

Robbins continued: “We’re asking businesses to only buy from an approved KYOCERA consumables partner or run the risk of supporting organised crime and trafficking gangs. Counterfeit products are increasingly hard to spot, so we would recommend resellers and customers are suspicious of consumables that do not have KYOCERA labelling or an unrealistically low price. If in doubt, our team is available to answer any questions or verify suspect products.”

KYOCERA is an active member of the Imaging Consumables Coalition of Europe, Middle East and Africa (ICCE), a non-profit making association comprising the leading companies in the sector. Formed as a direct response to the increase in counterfeit imaging consumables across the region, the organisation’s role has developed to include coordinating intelligence information, initiating joint industry raids and helping its members to pursue counterfeiters through the criminal and civil courts.