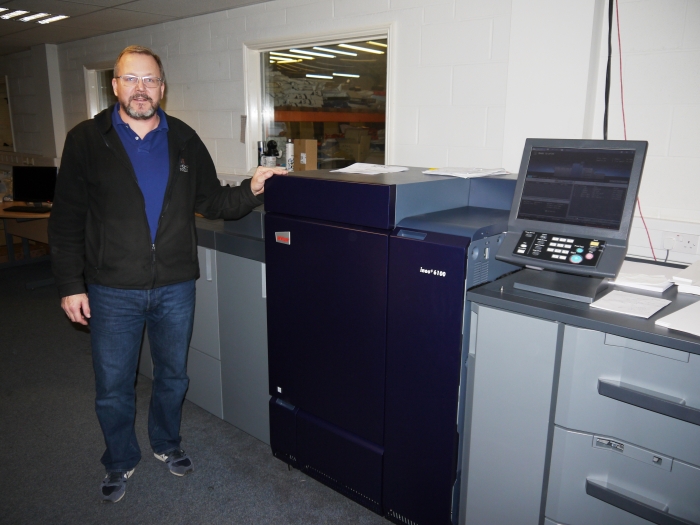 Cambridge-based Langham Press was founded in 2012 by David Arnold, a former Bluepoint Cambridge Director. One of the immediate requirements was to move into digital print as the company had the opportunity of printing short-run A4 landscape colour brochures for property companies.

Arnold recently decided to revaluate what was on the market and contacted DSales partner Printbyte who had supplied its original digital press. “Six years is a long time in terms of print technology so I decided to see what was available,” he said.

Printbyte recommended the Develop Ineo+ 6100 – a fast digital colour press, specifically designed to meet the demanding and diverse requirements of the commercial print sector. It has a colour output speed of 5,455 A4 sheets an hour, can print on stock up to 400gsm and SRA3+ in size allowing full size A3 documents with trim marks and A4 booklets to be trimmed to size.

Arnold opted to purchase the Ineo+ 6100 outright with no ongoing click charges, an option which Printbyte as a Develop dealership offers to its customers. “I didn’t want to be committed to a minimum monthly volume and other contractual constraints,” he said.

“I believe it is unique in the market because its colour management system checks the colour and duplex registration on every sheet it prints. Competitive presses we looked at only check on a sample number of prints like one in 16, so the Ineo+ 6100 gives us a commercial edge,” Arnold said, adding: “We no longer have a person constantly checking the machine making adjustments to the colour. Once a job is set-up, we just let it run.”

Increased speed and throughput
Crucially for Langham Press, the Ineo+ 6100 was fitted with an optional long sheet tray with a capacity of 2,500 sheets up to 762mm in length. “It’s perfect for the A4 landscape which we can now print duplex. The Ineo+ 6100 does the work of our two previous machines, its increased speed and throughput means we complete the jobs in a third of the time taken previously,” Arnold explained.

The installation was expertly managed by Printbyte who also provided staff training on the machine and the new controller – an internal Develop Ineo controller used with Develop’s Accurio Flux pre-press and print automation software suite, which simplifies production of recurring jobs.

Arnold has been pleased with the ineo+ 6100’s reliability and throughput, and the company has been able to move work away from its litho department. “We run it ten hours a day and in the first two weeks we ran nearly half a million sheets through the machine,” he said.

“Digital now accounts for about a quarter of our work but that’s gradually increasing,” Arnold explained, adding: “I would say with the new Develop press that should soon rise to 30 per cent because the speed and quality make it appropriate for more jobs. Being able to run 400gsm card has made a big difference because the finished work feels more substantial.”

Based on its continuing success, Langham Press has purchased new premises and will move a short distance away later this year. “We believe in good old fashioned customer service. Our business has expanded based on word of mouth and we have secured work from many local organisations, businesses and academic institutions because we provide an outstanding service. The ineo+ 6100 enhances our service provision. It has delivered everything I had hoped for and more,” Arnold concluded.