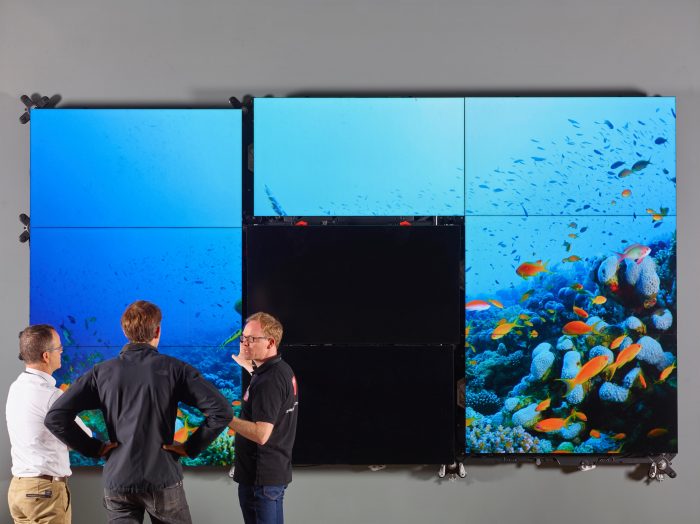 Midwich, a specialist audio visual and document solutions distributor to the trade market with operations in the UK and Ireland, France, Germany, Benelux, Iberia and Australasia, is pleased to announce it will be distributing Barco’s new premium product, UniSee, in the UK and Ireland from Wednesday 6th December 2017.

Barco, a global leader in professional visualisation technology, brings a spectacular viewing experience to LCD videowalls with the launch of Barco UniSee. By completely rethinking and optimising every aspect of tiled LCD video walls, Barco UniSee introduces a single uniform view while ensuring faster installation, easier servicing, and higher reliability. This makes it the perfect LCD video wall platform for a multitude of applications – including control rooms, reception areas, experience centres, showrooms and many more.

We’re excited to work in partnership with Barco on launching the innovative UniSee video wall product into the UK and Ireland. UniSee is set to revolutionise the market place providing a seamless viewing experience for end users, along with a bespoke bracketry solution behind the screen, making installation quicker and easier for installers!

“Having been one of the lucky few to witness UniSee prior to the global launch in October, I was immediately struck by not only the visual performance and scalability potential, but also the overall customer experience Barco have created with this product. We’re delighted to bring this revolutionary technology to our existing and new potential customers, and further strengthen our connectivity and projection relationship with Barco as a strategic brand for the Midwich Group.”

As a leader and innovator in large screen visualisation, Barco maintains close connections with end-users, resellers and distributors. Following their market feedback, Barco decided to completely rethink the concept of LCD videowalls and their mounting structures. The result is Barco UniSee − a revolutionary modular platform that surpasses traditional LCD videowalls on every level, and that will define the LCD video wall market for many years to come.

“We are delighted to announce our Partnership with Midwich and their specialist divisions for the distribution of Barco’s revolutionary UniSee video wall in the UK and Irish territories. Midwich will support Barco in the provision of demonstration facilities, backed up with fully trained technical specialists to assist in specifying UniSee and Barco solutions.

Barco and Midwich will jointly collaborate in delivering a unique value proposition to the selected UniSee reseller channel.”