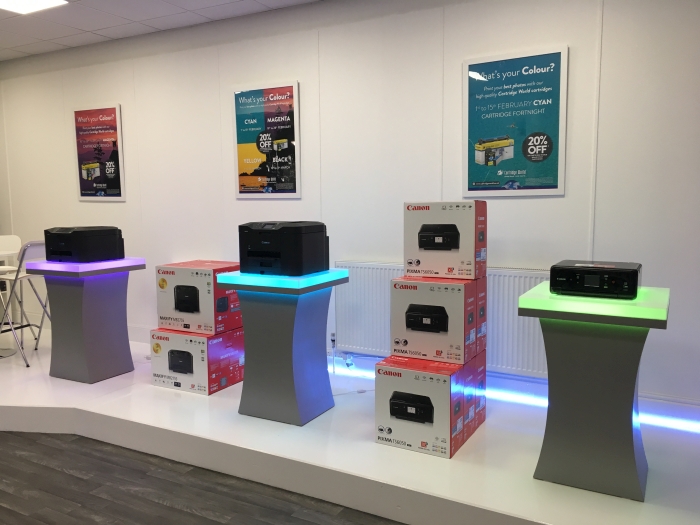 Cartridge UK & Ireland has opened a showroom in Harrogate, North Yorkshire, the first of five new showrooms planned for 2017.

Marking a departure from the traditional Cartridge World store, the newly formatted ‘showroom store’ is designed to showcase new printers and print supplies in a way that enables customers to get hands on with the equipment and choose exactly the right printer for their needs.

He said: “In Petersfeld, we’ve seen sales up 8.5% in January 2017, versus the same time period last year, and 5% more new customers. Along with Harrogate, we plan to use these stores to demonstrate best practice and what is possible when franchisees take full advantage of the promotions, tools and services, which have been introduced to the network by us since taking control of the UK business last April.”

Callow added: “The very first Cartridge World store outside Australia – where Cartridge World was founded – was opened in Harrogate in 2002, so it is entirely fitting that this brand new showroom should open in the town some 14 years later.”

“When we set up new showrooms later this year, we are keen leverage the long service and deep product understanding of Cartridge World’s franchisees and store managers to deliver solutions and services that help customers save money and leave the showroom with exactly the right product based on their needs. We have some amazing franchisees in the Cartridge World network, and this is a great opportunity for those who want to evolve their business capabilities and respond to rapidly changing market dynamics,” explained Callow.

Cartridge World Harrogate is the base of operations for Gavin Askew, General Manager UK and EU Sales Director. He said: “We’ve invested a lot of time and effort in developing this fantastic store to help elevate the Cartridge World brand and I’m excited about what this new retail experience will mean for our customers and the future success of the business as a whole.”