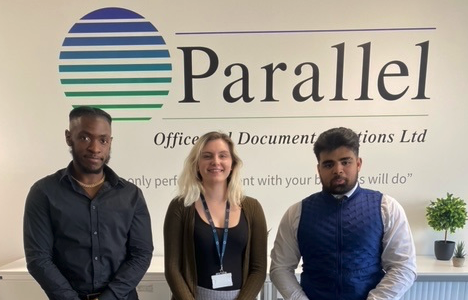 Parallel Office and Document Solutions started life in the middle of the pandemic back in August 2020 when our founder Gavin Auckland took a leap of faith and decided to set up a truly customer focused MPS and MDS provider, leveraging on over 20 years of experience within the industry with a goal of providing better support for customers and providing a new start for both himself and others.

Like most new businesses, Gavin has had to put in a lot of his own time and finances to get the business moving, but eighteen months in and the business is going from strength to strength having now just signed a partnership with Kyocera to join its already established Konica Minolta business.

The Parallel team kept growing, and after 12 months, Gavin felt the company was in a position to help young people get on to the career ladder. So, Gavin and Parallel’s new Sales Manager (That’s me) Rob Booth applied for the Governments Kickstart Scheme. The Kickstart Scheme makes up part of the Government’s “Plan for Jobs” skills and employment programmes, which also include apprenticeships, T levels and traineeships.

The Kickstart Scheme offers young people aged 16 to 24 years old and who are currently claiming Universal Credit and at risk of long-term unemployment a chance to work for 25 hours a week for six months while the Government cover the cost of their wages, National Insurance and pension. Gavin and I were keen to get involved in this scheme as we saw it as a great way to find new talent whilst supporting young people who have fallen through the employment gap.

February 2022 saw Parallel’s three Kickstarter’s join the team, and I wanted to share a little bit about these wonderful young people and let you hear how they are getting on.

Eashan is somewhat of a rugby legend, having represented Middlesex at the sport from the age of fourteen! He is an extremely articulate young man, and at only eighteen, has proved himself to be one of life’s fighters. His sporting talent has led to a competitive and motivated nature. He always tries to be the first in the office each morning, and you can tell he is going to be a fantastic salesperson as his face fills with joy when he’s booked a meeting or helped a customer.

Eashan came to Parallel after initially leaving home to take up a Level Three Business course at Oakland College, which was then cancelled, and he was left without the qualification he wanted.

Eashan, like many his age, was then affected by the pandemic and limited employment opportunities so took on night shift work at Waitrose in order to keep himself busy and in employment. “Eashan is such a hard worker, he’s so motivated and keen to learn, and it’s been a pleasure watching him find his feet here at Parallel. Eashan plays Rugby and is a personal trainer outside of work, and these disciplines are evident! He is a team player, and he also knows how to lead others!

“Parallel is a great environment, I’m a practical learner, and each day I find something new I’ve learnt, I go home feeling proud of myself and wake up excited for the day ahead.” Eashan

Due to a bereavement, Reshan left school at just sixteen without the qualifications he was predicted; feeling lost and struggling to find his place in the world. College was not the right fit for him, and he soon left to pursue his ambitions to work for himself. Reshan worked tirelessly to learn new skills that would allow him to launch his own business and teaching himself affiliated marketing and learning how to build websites. Reshan lacked one thing, the confidence to pitch his business to others!

When we first spoke to Reshan, he told us how he had worked three jobs to provide for his young family and how he’d been working for his father in law’s cleaning company. This is someone who clearly was not shy of hard work and has a level of determination that you don’t often see! To Gavin and me, he was someone who just needed to channel his energy and focus.

Reshan told me, “Within a month of being at Parallel, I feel like I’ve found my voice! I now love speaking to people on the phone, and I get excited when the phone rings! Before, I did not know how to approach making a customer call; when I was freelancing and working for myself, I knew I could deliver the customers’ requirements, but I just didn’t know how to get my foot in the door! This experience has really shown me how to present myself!”

Ellen is twenty-three and a mum to a bubbly two-year-old. She was nervous about going back to work, “It’s daunting as a young mum to leave your child in the care of others and head out to work. I was nervous that I wouldn’t find anything that would fit around my son and pay enough to cover the cost of childcare and all the other expenses. I also worried I wouldn’t fit in and end up working somewhere that I didn’t feel I could switch off from once I left for the day.”

Ellen had previously worked in retail and enjoyed the customer engagement, but it wasn’t something she wanted to go back to. The hours had been really long, and she didn’t feel she could balance both work and childcare!

Ellen continues, “I’ll be honest when I went to the job fair, I truly felt I was wasting my time! How would I find an employer who was willing to take on a young mum without much experience and who couldn’t commit to overtime or long hours? I was speaking to another company when Rob from Parallel approached me and asked me why I didn’t feel I could add value; I instantly liked him and realised maybe what I saw as a negative could be seen by others differently.”

I approached Ellen as I could tell from what she was saying that she was like so many women today, torn! She wanted a career, but her son came first, and in my mind, family should always come first! I saw a young lady who was willing to work hard, who was articulate and clever but who understood that life is about happiness and family and not about status or money. She was exactly what Parallel was looking for; sales and marketing roles in our environment are not always about pushing products and solutions. It’s about nurturing accounts, listening, understanding requirements and prioritising! Who better than a mum who has had to learn to multitask and who understands putting others’ needs first?

Ellen joined the team, and her confidence blossomed pretty much overnight. “Parallel already feels like a family”, describes Ellen. “Gavin and Rob are like those really good Dads who don’t hand things to you on a plate but encourage you to do things yourself. They understand all our differences and let us use them to our advantage.

I hope you have enjoyed getting to know a little bit about the team and why we are so grateful to have them all on board.