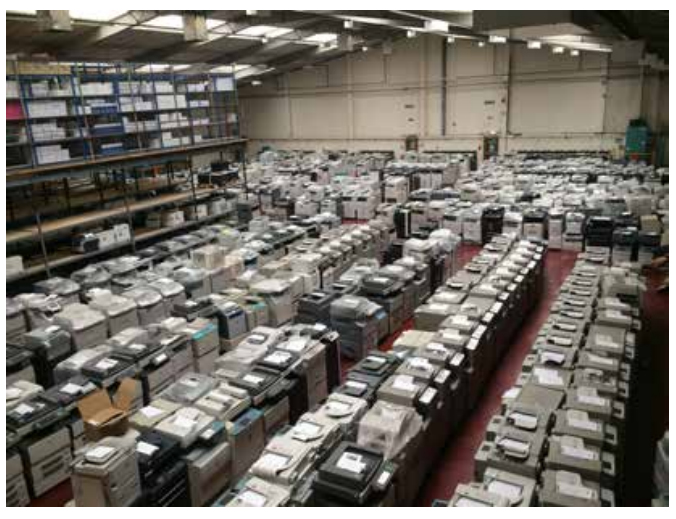 Trade Copiers, founded by Managing Director Stephen Armistead, who works alongside his two sons and daughter, buys used multifunctional printers from dealers and OEMs and then resells them around the world.

With overseas demand for second-hand devices in full working order continuing to increase, the family-run business is actively looking to expand its customer base and work with more dealers, for whom it offers a pain-free way to generate additional revenue by selling devices removed from customers’ premises when upgrading their flet with new technology.

In 2002, Armistead, who has a channel background in sales, spotted an opportunity to make money buying and reselling machines that had reached endof-life in the fild. He started the business initially trading within the UK, but steadily built up a network of contacts overseas. Today, Trade Copiers conducts about 95% of its business abroad, shipping used machines by the container-load all over the world to destinations including UAE, China, Singapore, Malaysia and, to a lesser degree, within the EU. “We do still trade in the UK, but volumes are very small now; the big opportunity is most defiitely in export,” said Armistead.

He added that the fim deals mostly with trading posts and only ships by the container-load. “A lot of the countries we sell into buy in bulk and then ship on to fial destinations; the only criteria is that machines must be in full working order,” he said.

Dramatic growth
With the export side of the business growing rapidly, and orders coming in thick and fast from customers around the world, Trade Copiers has had to expand to support its fast growth trajectory. It started out operating from 100 sq. ft. of rented space within a warehouse and 12 months ago moved into new premises that include a 25,000 sq. ft. warehouse housing around 3,000 machines at any one time.

“We invested £1 million and secured a much bigger site which, most importantly, provides us with space to build additional warehousing and offie accommodation to support future growth,” explained Armistead.

Likewise, having started with a single van to do pick-ups across the country, Trade Copiers now has a flet of lorries that are on the road fie days a week, collecting used MFPs and wide format printers and taking them back to HQ to have all data cleansed prior to resale. Headcount has also grown in line with the company’s expansion, and Trade Copiers now has 20 staff, all of whom work in the Penrith offie.

Fair prices
Turnover has increased steadily year on year, which Armistead attributes to the company’s success in winning a much bigger slice of the used device market.

“We deliver a professional service to our customers and we pay fair prices,” he said. “We’re offering dealers an opportunity to earn more from each contract win. In almost every case, they have to take out and dispose of the second hand kit they’re replacing – we’ll pay them for it and collect it, too.”

Trade Copiers deals in most makes and models but focuses in particular on Ricoh, Canon, Konica Minolta, Sharp and Xerox. “There are certain models that are hot sellers, ones which we can sell as many as we can get, anywhere in the world, so naturally we’re keen to get these in,” said Armistead.

He added that wide format presents a massive new opportunity: “This area is fast developing and we’re continuing to win new customers for these types of device.” Further growth is fimly on the agenda. In an average month, Trade Copiers already exports in excess of 1,000 machines and Armistead hopes to double this over the next three years. “We want to purchase more machines and make more new contacts,” he said. “We have massive capacity here and can process signifiantly more devices than we are currently handling.”

Another branch of the company involves selling consumables. “This is an additional service we offer to customers and is complementary to our main business,” explained Armistead. “We only deal in original supplies, keep large up to date stocks and offer fast delivery and competitive pricing.”