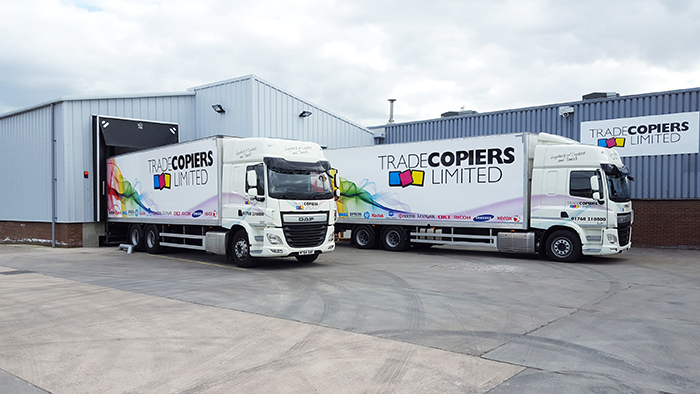 Playing to its strengths

The family-run company’s core business is buying used multifunctional printers from a large number of dealers and OEMs and reselling them all over the world.

Established in 2002 by Managing Director Stephen Armistead, who works alongside his two sons and daughter, Trade Copiers initially traded within the UK, but having steadily built up a network of contacts overseas, it now conducts about 95% of its business abroad. It ships used machines by the container-load all over the world to destinations including UAE, China, Singapore and Malaysia and to a lesser extent within the EU.

Fuelled by ever growing global demand for second-hand devices in full working order, Trade Copiers has achieved sustained year on year growth. Turnover this year was 20% up on last year and Armistead is targeting a further 20% to 30% growth next year. He added: “Further growth is firmly on the agenda. We hope to double in size over the next three years.”

The company’s core business is supplemented by a secondary branch that supplies consumables. “This is an additional service we offer to customers and is complementary to our main business,” explained Armistead. “We only deal in original supplies, keep large upto-date stocks and offer fast delivery and competitive pricing.”

Trade Copiers is now planning to expand its operations further with the establishment of a new dual-line dealership to supply MFPs and printers to local companies. “We are in talks with a number of OEMs and we will also create a local service operation,” said Armistead.

“It’s the next natural progression for us. We already supply equipment locally on a small scale and we know a lot of people. We’re looking to really ramp that up. It’s a massive opportunity to create a new revenue stream, especially within service. That’s where much of the growth will come from in the next couple of years.”

The company is currently recruiting for this new venture and has up to five vacancies to fill across both sales and service.

Meanwhile, the export side of the business continues to be extremely successful, with orders coming in thick and fast from customers worldwide. The firm has a fleet of lorries on the road five days a week, collecting used MFPs and wide format printers that are then taken back to Penrith where they are wiped of all data prior to resale.

“We deal mostly with trading posts and we ship by the container-load. A lot of the countries we sell into buy in bulk and then ship on to final destinations. We are moving kit in and out all the time,” explained Armistead.

In an average month, Trade Copiers exports in excess of 1,000 machines. “We have massive capacity here and can process significantly more devices than we are currently handling. We can carry up to 3,000 machines on-site and it makes commercial sense to leverage our capability and utilise that space to hold stocks of new equipment as well,” he said.

Armistead acknowledges that it will take some time to get into a positive position with this new venture but says the business is strong. Last year, Trade Copiers, which started out renting 100 sq. ft. in a warehouse, purchased new premises incorporating a 25,000 sq. ft. warehouse.

“We invested heavily and secured a much bigger site, which importantly provided us with space to build additional warehousing and office accommodation to support future growth,” he said.

The company has added two extensions, including a new loading dock, and has already embarked on Phase Two, which includes a major office refurbishment.

In addition, Trade Copiers has invested a quarter of a million pounds in its transport fleet. The acquisition of two 26 tonne HGVs for making collections and deliveries across the UK and Europe plus another 7 tonne van brings the total number of vehicles in the company’s fleet to five. Professional livery promotes the brand on every vehicle.

Headcount, too, has grown in line with business growth. There are now more than 20 staff based in the Penrith office and the firm recently recruited more sales professionals to drive further growth.