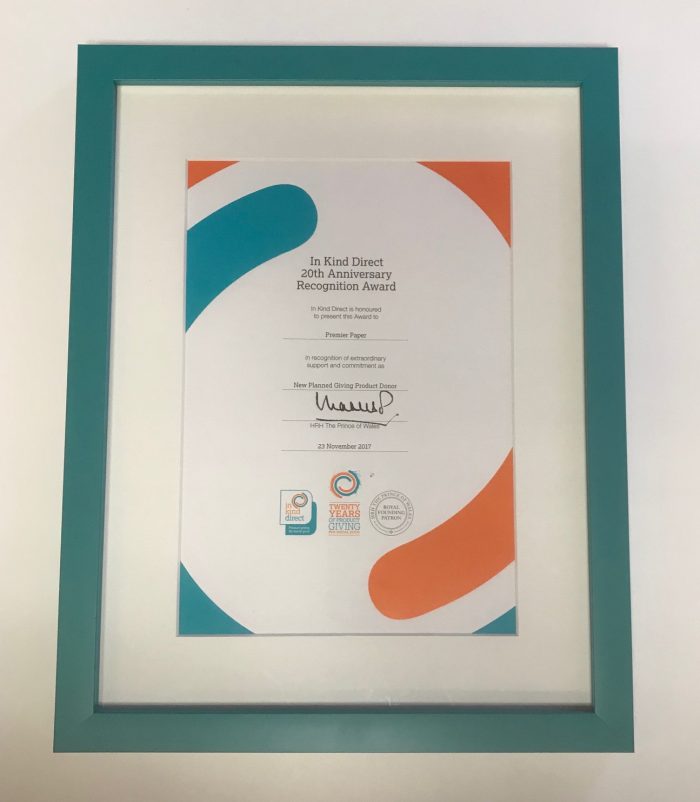 Premier Paper received a royal welcome from HRH the Prince of Wales after being recognised for their support and commitment as a product donor to charity In Kind Direct.

Founded in 1997 by HRH The Prince of Wales, In Kind Direct distributes consumer goods donated by companies to grassroots charities that are tackling a wide range of issues, from child poverty to domestic abuse and disability, providing life’s essentials to vulnerable people across the UK and overseas.

Since beginning their support in April 2016, Premier has donated over 5,000,000 sheets of Multicopy A4 80gsm copier paper. The donations have contributed in making a significant difference to people’s lives, with 91% of charities saying that In Kind Direct helped them to source goods that they would otherwise have been unable to afford.

Premier joins a list of recognised household brands including L’Oreal, Procter & Gamble and The Disney Store, in their support of the charity. Premier was first introduced to the charity through its bankers, Lloyds who are also major sponsors of In Kind Direct.

In recognition of Premier’s contribution, Group Marketing Director David Jones was invited to join the In Kind Direct 20th Anniversary celebration dinner at Buckingham Palace. This special event was hosted by HRH the Prince of Wales, and Premier Paper were recognised for their support.

Dave commented “I was honoured to be invited to such a prestigious event on behalf of Premier Paper. In Kind Direct provide a real lifeline to those in need, and we’ve found it such a rewarding experience to know that being a product donor is making a difference to the lives of others. We were also delighted to donate the paper to produce the 20th Anniversary Review. We supplied GF Smith Colorplan for the cover and Advocate for the inside pages, which gave a wonderful result”.

Premier Paper continues to be one of the 21 major product donors in this product-giving revolution, bringing provisions to charities and people who are in desperate need.

To find out more about getting involved with In Kind Direct visit – http://www.inkinddirect.org/about-us