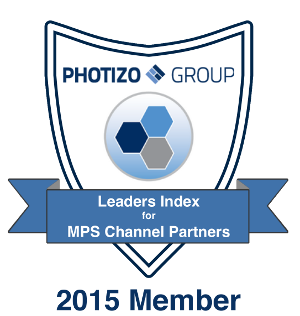 By Digital Team on 7th September 2015

Photizo Group has recognised Principal Ltd as a leader in managed print services for the second year running. The company was one of 13 independent channel partners selected to participate in Photizo’s 2015 Leaders Index for MPS Channel

The Index brings together independent MPS providers that represent the gold standard of managed print and document services in North America, Europe, Africa and Australia. Photizo Group uses it as a lens through which to gauge the current landscape of MPS.

Ken Stewart, Vice President of Services for Photizo Group, said: “As the managed services landscape reaches maturity in many markets, we continue to see a demonstrated need for measurable best practices and benchmarks built on real-world results by recognized leaders in managed print and document services,. These MPS leaders not only demonstrate leadership in MPS, but a genuine interest in the pursuit of best practices that benefit the industry and the customers it serves.”

Published in MPS and News