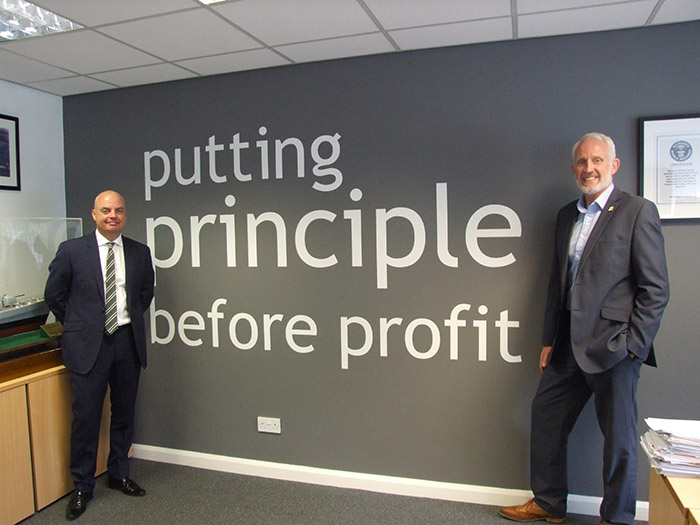 Principle before profit is good for business

Since adopting a policy based strictly on responsible and ethical business, Warrington-based Sharples Group has seen the business go from strength to strength

Eleven years ago, fellow directors Mark Brocklehurst and David Griffiths led an MBO of the company that will celebrate its 40th anniversary year in 2017. The Toshiba-first dealership (Sharples also carries OKI, Lexmark and KYOCERA, but the bulk of its business is conducted with Toshiba), has grown to a very healthy turnover of £3.2 million and a staff that totals 26.

Brocklehurst said that the firm has always operated on an ethical basis but up until recently they hadn’t really put a name to it. “I

think what made us different is that we didn’t just talk the talk,” he said. “We’ve always ensured that each and every deal was financially viable for Sharples, but we also took it one step further by making sure each proposal answered the question: ‘What’s in it for the customer?’

“There have been occasions in the past when I’ve looked at a proposal and pushed it back to the sales manager saying, I can see what’s in it for us, but what’s in it for the customer? Have another look and make it better,” he added. This is, he admits an approach that sounds mad. “But, it is an effective means of boosting business for the Sharples Group. What’s good for the customer, is ultimately good for us too,” he explained.

Over the years the company has entered (and won) a number of awards. But it was when writing everything down to compile their entry for the prestigious High Sheriff of Cheshire Enterprise Awards that the impact of all they had achieved really hit home. “We looked at all we have done and it was pretty impressive, we realised then that what we had was a real USP for our business,” Brocklehurst said.

“At the end of the day the kit we’re selling is the same as any number of other resellers, but our people and approach to business makes us stand out, so we came up with a name and began to formally shape our ethical business policy, hence principle before profit came about.”

The company’s unique approach was officially recognised when it won ‘The Most Responsible Business Practice in Cheshire’ Award in the aforementioned High Sheriff of Cheshire Enterprise Awards.

Brocklehurst continued: “We’re a c£3m business and over the past five years, we have raised nearly £500,000 for North West-based charities. We punch way above our weight when it comes to charity fundraising. The bigger you are the less chance you have of getting anywhere near this level of commitment, if you’re answering to shareholders then in almost every case, profit will be king. But as a small owner-managed business, it works for us, as a leadership team we all believe in it and work together to pull it off.”

Some of the North West-based charities to have benefitted from Sharples’ generosity include Warrington Wolves Foundation, St Roccos, Brainwaves, Joseph’s Goal, Bolton Lads and Girls Club and Warrington Youth Club.

Fundraising challenges have included zip wire slides, triathlons, Three Peak challenges, hiking and, of course, the much publicised 3,000 mile rowing crossing of the Atlantic Ocean in which Brocklehurst was one of the four brave rowers.

Later this year Brocklehurst is to take part in a new world record bid. He is going to ride his road bike up and down a hill non-stop for 72 hours in order to beat the current world record which stands at 48 hours.

“Principle before profit is primarily about people – our staff and our customers in all areas of the business,” Brocklehurst explained. The policy covers four areas: People, Customers, Environment and Community/Charity. “On all four counts, we absolutely walk the walk. It’s not just about putting your hand in your pocket and giving to charity, it’s about engaging with our customers, getting our people involved and with the environment in particular, ensuring we’re sustainable in all that we do,” he added.

Brocklehurst insists that getting customers on-side is crucial for any business and the best way to do that is to keep them informed and to share the benefits. “It is also wise to keep your customers fully up-to-date with your charitable activities because most will really appreciate your actions.”

When it comes down to looking after the planet, Sharples has a compelling story to tell. It was a founder signatory to the Warrington Climate Change Declaration and is always vocal in environmental debates.

As a Toshiba reseller it has been a Carbon Zero accredited company since September 2014 and is always looking at ways to reduce its carbon footprint. “For us it’s key to be able to demonstrate how we behave and we have a catalogue of things that illustrate what we do,” Brocklehurst said.

He added: “To offset the carbon emissions we can’t avoid, we donate £50 for every device we supply. This initiative provides a free energy-efficient stove to families in Kenya that halves the amount of wood which would otherwise be needed. We have now provided funding for 712 stoves and other clean water projects.”

On the home front, Brocklehurst said that coaching customers on best practice and helping them to reduce print wherever possible is a front and centre. “We do this by education and through implementing solutions such as rules-based software which encourages users to think before they print. We have also supplied two free eco-friendly copiers to local primary schools that allow the toner to be erased so the paper can be reused again and again; this engages our young people with a sound ecological viewpoint at a pivotal age.

“In addition we supply free recycling boxes to all our customers that allows toner cartridges etc. to be recycled,” he added.

The company is also recognised for channelling its efforts into its people so they can become the best they can be. “We strongly believe that if we look after our team they in turn will look after our customers,” Brocklehurst said. “Many of our people have got to the point where further promotion isn’t possible due to the nature of the fact that we are a relatively small team, but across the team we’ve got an average 12.5 years employment – we believe they endorse our culture with their loyalty.”

In a bid to encourage healthy wellbeing, the company subsidises sporting events and last year had 12 team members compete in their first ever triathlon.