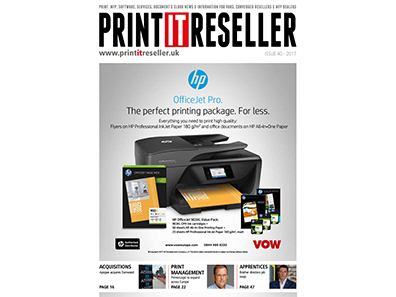 Apparently, Brits are becoming a nation of complainers, according to new research by a nationwide telephone answering service. alldayPA analysed its call data and found that calls of complaint made to its client base of 24,000 UK businesses have trebled over the last fie years, now accounting for almost a fith of all enquiries received. The company’s CEO says that we’re beginning to lose our traditional British reserve and adopt an American culture of blame and complaint, he also cites the rise of social media as a driving force behind the increase in phone call grumbles.

The number of vendors in the print space continues to shrink. We saw Samsung exit the print business last year when HP acquired the business, more recently Kyocera purchased Annodata, albeit the reseller will continue to operate independently and Danwood, arguably one of the biggest dealerships is to be integrated into the Apogee Group (page 16).
Acquisitions are undoubtedly one route to business growth and we expect there will be more to come. Apogee has fialised four deals in six months and stated its intention to complete more, and DMS Reprographics, the subject of this issue’s dealer profie piece (page 32 has also confimed it will be looking to acquire like-minded dealerships in 2019.

New research published by Beaming, the business ISP, found that more than half of British businesses fell victim to some form of cybercrime in 2016.

Demand for unifid threat management devices, web application fiewalls and network access control systems increased by 71%, 59% and 45% respectively, amongst those employing between 10 and 49 people, which begs the question should print and IT resellers be looking at cyber security technologies as an additional revenue stream?

And fially, if you’ve got any news about your business to share, would like to be included on our monthly Vox Pop panel, have a compelling business success story or simply wish to comment on any industry issues, please get in touch with us ateditorial@printitreseller.co.uk