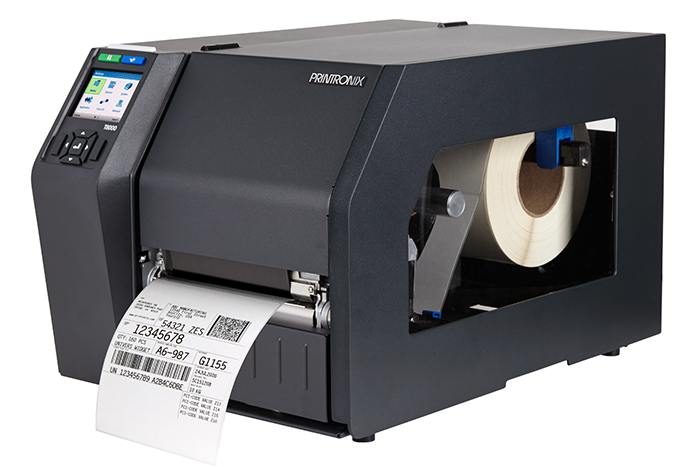 Raising the bar in barcode printing

The T8000 Thermal Printer series features a completely new architecture, developed over two years at a cost of $3 million, that, according to Printronix, exceeds the requirements of the most demanding users.

An important aspect of the new printer is an optional, fully integrated Online Data Validator (ODV) that can be fitted to the printer to verify 1D and, soon, 2D barcodes.

“Many customers are required either by mandate or by the internal compliance requirements of their customers to verify every single barcode before it ships. We have built a fully integrated unit that allows us to read that barcode, verify the data, strike out a barcode if it’s non-readable and reprint it,” he said.

He added: “Most retailers are subject to charge-backs of $3-$5 if a barcode on their goods is not readable. In the case of a large retailer, a small percentage of non-readable barcodes can add up very quickly to huge amounts of files and fees.”

The T8000 series is underpinned by a new architecture based on an ARM A9 processor that offers 40% faster print speeds (14 IPS); up to five times greater processing power for a quick fist label out; improved integration with other applications; and eight times more memory capacity than previous products.

Petkov says that the one of the most impressive features of the new architecture is its ability to maintain print quality even at high speed.

“Many companies can claim high print speeds, but what they don’t often mention is the fact that print quality deteriorates as speed increases. Printronix can print a label that is as good at 8 IPS as it is at 14 IPS. We have received incredibly positive feedback from customers saying ‘We couldn’t believe that the printed quality is as good at 14 IPS, the highest speed, as it is at 6 and 8 IPS’,” he said.

Allied to the T8000’s enhanced performance is a new industrial design that combines greater ease of use with rugged, reliable operation, from the full metal enclosure to an optional rugged printhead for humid or dusty environments that costs a little more than a standard cartridge but lasts twice as long, giving a clear TCO benefit.

Helpful features include the sideloading of consumables, a large viewing window for supplies monitoring, a snap-in printhead and a large 3.4in colour display with easy navigation keys.

IT administrators are able to monitor and manage printers remotely from a central IT console. A virtual panel replicating the operator panel on a remote device enables them to control printers anywhere in the world via a PC screen.

For plug and play simplicity, the T8000 series supports seven emulations, including, for the fist time on a thermal barcode printer, PostScript and PDF from any ERP environment. This means that any enterprise with a mixed environment of printers, including laser and inkjet devices in warehouse environments, can swap an existing printer for a T8000 and not have to install middleware or modify their software or applications in any way.

Other noteworthy enhancements include the ability to print in temperatures of -5°C to 0°C without the need for a heated enclosure – an accessory that normally costs around $1,000; and the option of mobile power carts with twice the battery capacity of third party solutions for printing flexibility in large warehouses and manufacturing environments.