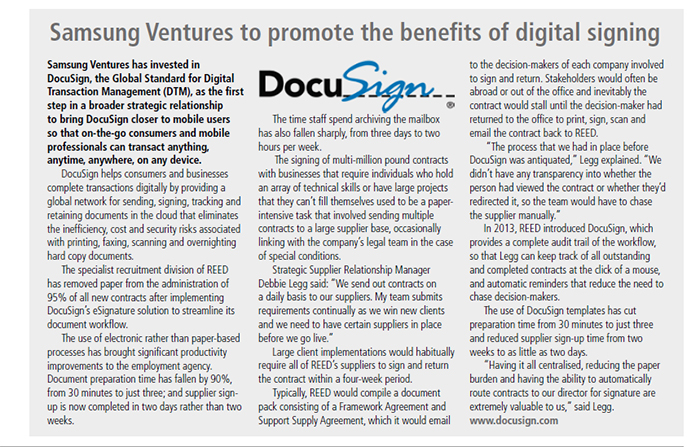 Samsung Ventures to promote the benefits of digital signing

Samsung Ventures has invested in DocuSign, the Global Standard for Digital Transaction Management (DTM), as the first step in a broader strategic relationship to bring DocuSign closer to mobile users so that on-the-go

consumers and mobile professionals can transact anything, anytime, anywhere, on any device.

The specialist recruitment division of REED has removed paper from the administration of 95% of all new contracts after implementing DocuSign’s eSignature solution to streamline its document workflow.

The use of electronic rather than paper-based processes has brought significant productivity improvements to the employment agency. Document preparation time has fallen by 90%, from 30 minutes to just three; and supplier signup is now completed in two days rather than two weeks.

The time staff spend archiving the mailbox has also fallen sharply, from three days to two hours per week.

The signing of multi-million pound contracts with businesses that require individuals who hold an array of technical skills or have large projects that they can’t fill themselves used to be a paperintensive task that involved sending multiple contracts to a large supplier base, occasionally linking with the company’s legal team in the case of special conditions.

Strategic Supplier Relationship Manager Debbie Legg said: “We send out contracts on a daily basis to our suppliers. My team submits requirements continually as we win new clients and we need to have certain suppliers in place before we go live.”

Large client implementations would habitually require all of REED’s suppliers to sign and return the contract within a four-week period. Typically, REED would compile a document pack consisting of a Framework Agreement and Support Supply Agreement, which it would email to the decision-makers of each company involved to sign and return. Stakeholders would often be abroad or out of the office and inevitably the contract would stall until the decision-maker had returned to the office to print, sign, scan and email the contract back to REED.

“The process that we had in place before DocuSign was antiquated,” Legg explained. “We didn’t have any transparency into whether the person had viewed the contract or whether they’d redirected it, so the team would have to chase the supplier manually.”

In 2013, REED introduced DocuSign, which provides a complete audit trail of the workflow, so that Legg can keep track of all outstanding and completed contracts at the click of a mouse, and automatic reminders that reduce the need to chase decision-makers.

The use of DocuSign templates has cut preparation time from 30 minutes to just three and reduced supplier sign-up time from two weeks to as little as two days.

“Having it all centralised, reducing the paper burden and having the ability to automatically route contracts to our director for signature are extremely valuable to us,” said Legg.