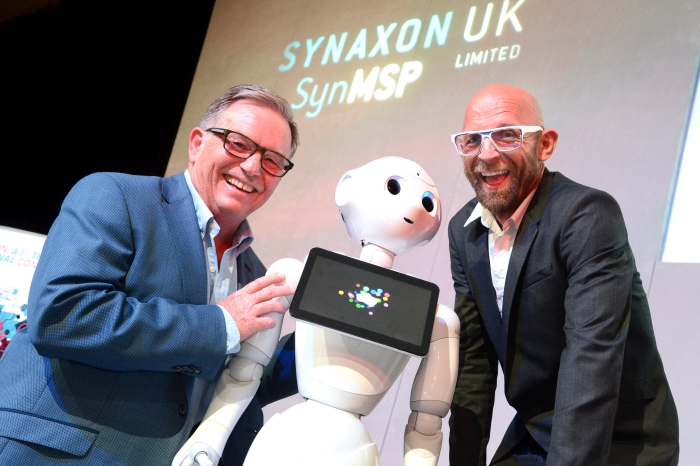 The Synaxon channel services group’s annual member conference has become one of the major events of the year for the IT and office products trade. With more than 400 attendees, it has become an important focal point for both dealers and suppliers to meet, discuss business and explore new ideas.

The theme of this year’s event at the International Conference Centre in Telford was artificial intelligence, but it was as much about managed services, collaboration and team working as it was about emerging technologies. There were presentations from a number of key vendors, including Microsoft, HP and BT. Services automation specialist Datto, and CloudBlue – the cloud arm of distributor Ingram Micro – also featured.

Exponential growth
One of the highlights was the talk by Jason Bradbury, of Gadget Show fame, who gave a hugely entertaining talk on the exponential growth of computing power and the incredible power of AI and robotics that are now emerging as a result.

Many of the key vendors who sponsored, spoke and exhibited at the event, had new products and services on show, with HP demonstrating its first laptops with a built-in privacy filters that can be turned on and off at any time. The company also talked about the built-in security that it now provides in all of its print and MFP devices. Epson and Lexmark – both of whom were at a Synaxon event for the first time – were amongst the 50-plus exhibitors.

Services shift
Managing Director Derek Jones, said he was delighted with the way members and suppliers had responded. “Once again, our community has really entered into the spirit of what Synaxon is all about. The level of discussion and interaction that took place over the two days was fantastic. Collaboration, sharing ideas and working together is co-operation is what Synaxon is all about at its core, and the inspiration that members get from being part of Synaxon is there for all to see at the conference.”

This year, there had been a noticeable shift in business towards managed services, he noted. “Everyone is talking about managed services – for print, networking, security back-up, DR and more. There are big opportunities here and we’ve seen that reﬂected in the uptake of our SynMSP membership category this year. Managed services are becoming integral to all our members and they are very much a part of Synaxon’s and the channel’s future.”

Time well spent
Members who attended agreed that it was time well spent. Mike Hoffman, Managing Director of Edinburgh-based MSP, Drum Brae, said: “It is always well worth the time and effort to attend the Synaxon Conference. Its usefulness extends well beyond getting an update on the group itself and taking the pulse of the industry. We often strike up new relationships, pick up new ideas and hear about new initiatives that have a real impact on our business over the next year – that’s certainly been the case this year.”

Suppliers were also pleased with the results. Karen Simidian, Channel Sales Manager for Epson (UK), said: “The Synaxon event was the perfect event for Epson to engage with a broad range of resellers; with lots of interest in our Ecotank range and Print 365.”

Kerrie Spalding, Print & Supplies General Manager at Ingram Micro UK, which was a main sponsor of this year’s conference, agreed. “The Synaxon annual event is a perfect way for our print vendors to showcase their offerings to a diverse range of IT resellers. We found the level of engagement from the members to be of excellent quality and made it very worthwhile.”

Yemi Elegunde, Channel and Distribution Sales at Western Digital, said: “It’s always a good event and this year was no different. The exhibition area has been really busy and there was a very positive atmosphere. There’s plenty of time and space to network and talk. That’s very important because, in the end, the IT trade is still a people business.”

Recognising excellence
The Synaxon Awards 2018 were presented to the following
companies and individuals:

Distributor of the Year – Ingram Micro

Vendor of the Year – Western Digital

Service Supplier of the Year – Continuum

TrustATec Member of the Year – Resolve IT