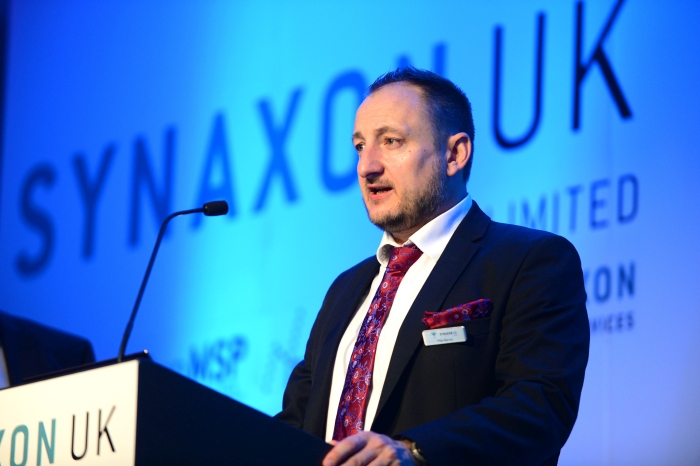 Established in the UK 11 years ago, SYNAXON has undoubtedly been a big success story. The channel services group now has over 600 members and more than 50 supplier partners that work together to try and identify and develop new areas of opportunity in the market, as well as provide a whole range of business benefits, including access to the EGIS procurement platform and special terms and conditions from supplier partners.

That said, SYNAXON UK has some work to do to get to the same heights as in its home country, Germany. Over there the group is simply huge, with more than 3,000 members and 200 staff and offering a wide range of services and support. The EGIS procurement platform provides real-time aggregation for 80 distributors in Germany and SYNAXON’s marketing activities generate a significant volume of links and leads for members every month.

While he acknowledged that there are clear differences between the two markets, Frank Roebers, CEO of SYNAXON AG, feels that the UK operation can go much further and he came to this year’s conference which was themed ‘New Horizons’ to outline the group’s plans to make a ‘new start’ in the UK and outline the massive investment programme that the group is now rolling out here.

In his keynote address, Roebers told members: “For the past decade, our approach has been to develop services exclusively for the UK market. One reason for that was that we were transforming our business model in Germany from being product-focused to services-focused. We’ve now completed that process and over the past five years we have made SYNAXON a real success story in Germany. We are now to invest a whole lot of energy and money into SYNAXON UK, so that we reach the same level of performance here as we have in Germany. We are kicking off a completely ‘new start’ in the UK.”

That investment has already seen SYNAXON UK recruit additional staff to provide added support to members and over the next few months, more people will be added to the team as the UK operation looks to mirror the group’s meteoric rise in its home country. New initiatives, such as the SynMSP and iTeam communities, and the SYNAXON Academy, which provides specialist training for members, have already been launched in the UK and all of these programmes are being expanded.

The Central Trading scheme, which will provide preferential pricing on a whole range of products from leading vendors, is also up and running in the UK, and this will be expanded massively over the coming year. Other services, such as SYNAXON Managed Services (SMS), which will provide a whole raft of options members can offer to their customers, will be launched later this year.

SYNAXON also operates a highly effective marketing programme in Germany and it’s planning to emulate that in the UK market as well.

Other changes will be more immediate. This month (July), all current members will be transitioning to the membership status that of SYNAXON IT Partner. This won’t be very different to their current enrolment but will bring additional benefits in the form of access to the new services and the additional support of the new starters.

Mike Barron, Channel Director at SYNAXON UK, said the whole team will be working hard to make sure that members reap the rewards of the changes. “These are exciting times for everyone involved with SYNAXON UK. It really is a new start – but one that preserves what’s been so good about SYNAXON UK to date and adds to and builds on that very solid foundation. We have a great group of members and with the additional heads that we are now bringing in across the group, members are going to see a significant rampingup of the service and support we offer them.”

As the resources to support them become available, the group will also be looking for new members. Barron added: “As we demonstrated at the conference, we have a great deal to offer our members now and yes, we will certainly be looking to bring more members on-board over the next few months. It’s vitally important though that we look after the current members first and that we make sure they are benefiting in every way they can from being part of SYNAXON UK.”

SYNAXON UK used the conference to introduce the management team behind the key programmes and services, all of which will or already do have dedicated people working on the ground in the UK. It also ran an extensive series of workshops, which enabled members to hear about the new services in more depth.

Other highlights of this year’s conference included a fascinating insight from Tim Suhling, VP Global Business Intelligence of headline sponsor, Ingram Micro, on how the distributor is using advanced data analytics to drive more insights for resellers and thus assist them with customer retention and development.

An extensive exhibition area saw demonstrations of some of the latest technologies and services on the market from the likes of Databeat, Terra, Continuum, DMSL, F-Secure, Microsoft and Tech Data. Commenting on the event, John Carter, Managing Director of connectivity specialist distributor, DMSL, said the conference had been very successful. “It was another great event for us and for SYNAXON UK. We talked to a lot of current and potential partners. With the full-fibre roll-out, 5G coming and connectivity becoming more important as businesses adopt cloud services, we need to work with as many of the group’s members as we can. There are some exciting times ahead, I think,” he said.

Suppliers were pleased with the turnout and the results. Rebecca Benzie, Head of Sales SMB at Ingram Micro UK said: “The SYNAXON UK conference was a really good event for us. We got to speak to a lot of members, and it was a very positive and productive couple of days. We are excited about the investment plans and we’re really looking forward to working with the expanded team over the coming year.”

The riches-to-rags and back-to-riches entrepreneur, Gerald Ratner gave a hugely entertaining speech to members in the afternoon of the first day, which was followed by the evening gala dinner. This was sponsored by AMD, which continues to make a splash in the market with its Ryzen family of processors. Jay Spicer, Commercial Channel Manager for Northern Europe, was there to present the awards, which went to the following top-performing member and supplier partners:

Distributor of the Year – Ingram Micro

Vendor of the Year – AMD

EGIS Member of the Year – The Computer Shop

Member of the Year – Kogo

Spicer said that the whole conference and the awards had been a tremendous success. “To me, this event typifies everything that is good about the channel. There is a great atmosphere and the spirit is really positive. It’s great to be a part of something as thriving and inspirational as this, that really reflects the vibrant nature of our industry. Everyone has got a lot out of it. We’ll definitely be back – I think everyone will.”

Amongst the new additions introduced to members at the 2019 Member Conference were Tony Dell, who has joined as Strategic Buyer and will be managing the group’s distribution agreements. Dell has previously worked as Purchasing Manager at both VIP Computers and Anixter. Mario Scarpa has joined SYNAXON UK as its new EGIS Support Executive and evangelist for the online purchasing system; Natasha Judge and Terry Hall have both joined as Channel Business Development Managers; Robin Martin has been brought in as Special Bids Support and new Central Purchasing Programme Manager; and Alison McMahon has joined to head the SYNAXON UK Academy, which will provide certification training and enablement services to members.