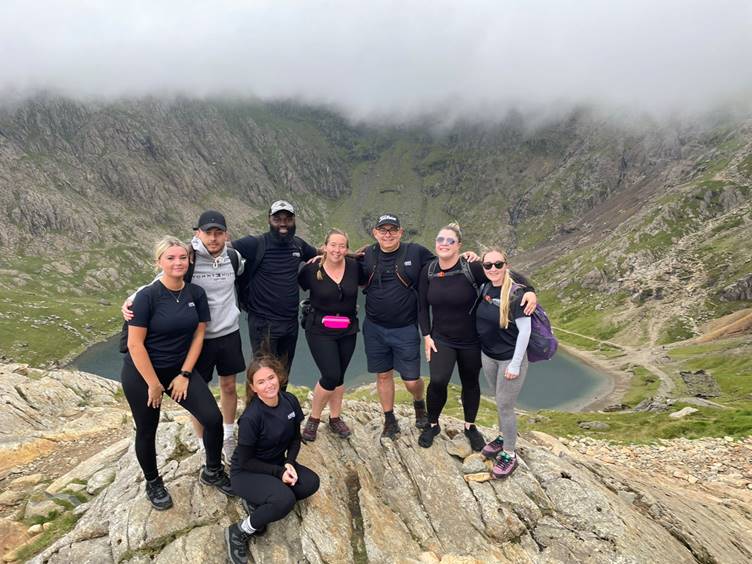 Team Apogee raise over £21,000 for The Royal Marines Charity

As well as raising a considerable sum toward The Royal Marines Charity, Team Apogee also accompanied veteran Lee Spencer BEM for his latest challenge, the Triathlon of Great Britain.

Managed workplace services (MWS) provider, Apogee Corporation, has collectively raised over £21,000 for The Royal Marines Charity as part of The Triathlon of Great Britain – the latest challenge attempted by Lee Spencer, AKA The Rowing Marine.

Apogee employees raised £11,032 on JustGiving.com, which will be donated to the charity in addition to the company’s initial pledge of £10,000 at a recent charity auction. Donations made to Team Apogee’s fundraising will go toward supporting the charity to continue to provide help to veterans; including (but not limited to) mental health training, careers advice, education, alcohol intervention programmes, and support for veterans who are wounded, injured, and sick.

Spanning the entire length of the United Kingdom, the challenge was of a scale never before attempted by any athlete, able-bodied or otherwise – theoretically combining 1060 miles on a bicycle with 45 miles of mountain hiking over Snowdon, Scafell Pike, and Ben Nevis; and 22 miles of swimming.

This gargantuan undertaking was initiated to raise money for The Royal Marines Charity, an organisation that is uniquely placed to help Marines and their families to overcome the challenges that come with transitioning to civilian life, poverty, mental disability, life-limiting illness, and life-changing injury.

Following the accident that took his leg, Lee’s rehabilitation with the Royal Marines Charity surrounded him with servicemen and women whose lives had been changed irreparably as a result of their service. By participating in challenges such as these, Lee hopes not only to spread awareness, but to inspire veterans who seek to rediscover themselves following life-changing injuries.

“I hope I am able to inspire all those who seek to rediscover themselves, and raise awareness and funds for one very worthy charity who have supported and inspired me.”

Apogee employees raised over £11,000 collectively with their own individual sponsorship campaigns – each participating in certain legs of the journey to support Lee’s cause along the way.

“It’s been a huge honour to be able to support Lee across a cycle and climb; and witness the mental strength, determination and passion Lee has for the RMA in supporting fellow ex-servicemen and women,” says Ryan Hudson, Content Marketing Manager for Apogee. “Lee’s story, attitude and message is an inspiration to all.”

Ryan was part of the team who accompanied Lee while he summited Scafell Pike, as well as the preceding cycle journey from Preston to Wasdale Head.

Vic Drinkwater, Fundraising Manager for the Royal Marines Charity, adds: “a huge thank you goes out to Team Apogee on behalf of RMA The Royal Marines Charity. What determination and drive you have all had throughout your fundraising – such amazing tenacity, a supportive and encouraging ethos, and a real show of a cheerful attitude and approach all round.”

“The Team Apogee fundraising has also been phenomenal in supporting Lee’s Triathlon of Great Britain’s overall fundraising campaign totals. Without this dedicated and focused support from you all, the charity would not be able to continue its vital work and we are all extremely thankful and grateful for all your efforts.”

Carl Day, Apogee’s Director of Sales and Marketing, says: “We’re inspired by Lee’s efforts and ambition, and enormously proud of our employees who supported him. A big thank you to everyone who donated to help Team Apogee raise £11K for our Royal Marines!”

An independent subsidiary of HP Inc., Apogee is capable of providing technology that allows businesses of all shapes and sizes to automate tedious, time-consuming tasks. Be it invoicing, admin, equipment set-up, post, or even just replenishing new printing supplies; Apogee takes care of all the heavy lifting, giving companies the freedom to focus on long-term goals and strategies.