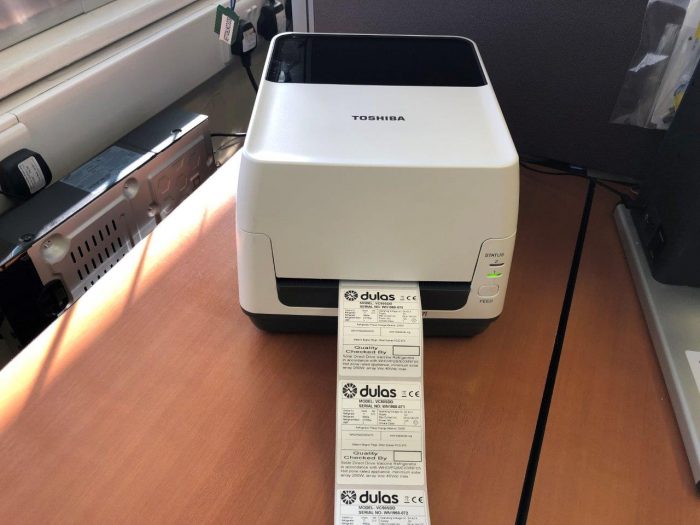 Toshiba TEC is better by degrees at Polestar Cooling

Polestar Cooling manufactures state-of-the-art refrigeration equipment that is designed for a wide range of scientific, medical and industrial purposes. When its previous provider’s labels were not up the required standard, it switched to Toshiba TEC’s pioneering print technology and hasn’t looked back.

From its 2,000m2 cutting edge manufacturing facility, Bognor Regis based Polestar Cooling offers customers around the globe refrigeration solutions that are used primarily in the scientific, medical and industrial sectors but also in water testing, incubation, catering and marine based applications. Its products include solar powered vaccine refrigerators, which can operate for 72 hours between charges and are used by organisations such as UNICEF to help fight disease in developing communities across the world.

Polestar Cooling’s team of specialists is able to design refrigeration solutions that meet a customer’s specific requirements and are shipped to harsh environments across locations such as far afield as Africa, Asia and South America.

‘Our refrigerators can operate in temperatures ranging from -40°C to 50°C,’ explains Dave Butfield, production manager at Polestar Cooling. ‘We pride ourselves on our ability to develop new products, from design through to production stage, quickly and within agreed timescales. Every part of the manufacturing and delivery process has to be of the highest standard and the correct labelling of each refrigerator ensures that customers have the correct information to hand.’

Polestar Cooling had started to experience problems with its labelling system and Dave says, ‘We found that the labels were fading in sunlight after a relatively short time and that they were coming away from the refrigerators due to poor adhesiveness. There were also problems with the software that came with the printers, which had numerous glitches that resulted in missing data. This was unacceptable and, as luck would have it, shortly after I had started to investigate other options, I received a call from Ryan Price, printer area manager at Premier Office.’

Since 1988 Premier Office has supplied over 1,000 businesses across Sussex and the surrounding area with print and document management solutions. It is now the leading office printer supplier in the region and has an excellent reputation for giving the right advice and aftercare support that maximises the potential of any investment.

‘Having contacted Dave and listened to his concerns, it was obvious that his existing print infrastructure was not up to the job,’ comments Ryan Price. ‘As a Toshiba TEC authorised supplier I have seen first hand how the company’s B-FV4 desktop printer series has benefitted a number of our industrial and commercial customers by handling any print requirement with ease. I was therefore certain that it would be the perfect solution to Dave’s printing issues.’

Small but perfectly formed, the B-FV4 desktop printer can fit into the tightest of spaces and is designed to offer the ultimate in flexibility. Stylish, robust and powerful, it utilises both direct thermal and thermal transfer technology and comes with USB memory support, a choice of interfaces and connectivity options as standard.

Becky Viccars, marketing manager at Toshiba TEC, states, ‘ The B-FV4 is able to seamlessly integrate into Polestar Cooling’s existing systems to create labels that are crisp, clear and long

lasting. When it comes to maintenance it couldn’t be easier, and drop-in paper loading allows quick and easy changes of media, while consumable parts can be upgraded thanks to a snap-in printhead and platen assembly. With the design and build quality that customers have come to expect from Toshiba TEC, the B-FV4 is also supported by a wide array of long-lasting consumables to make it as sustainable as possible.’

The B-FV4 has a print speed of six inches per second and can print up to a four-inch wide label. Each machine facilitates the use of a 300m ribbon, improving efficiency with less media changes required and they are available in various grades and qualities, further enhancing flexibility.

When Polestar Cooling took delivery of the B-FV4 Ryan Price helped to set-up the system and configure the NiceLabel next generation labelling software that came with it, which helps quickly design labels and create an efficient printing process.

‘Having Ryan on hand to make sure that everything was up and running as it should be was an enormous bonus,’ comments Dave Butfield. ‘The system is programmed to print three sizes of black and white label – 62mmx140mm, 62mmx40mm and 62mmx70mm – which detail packing and build record data, as well as information such as weight, model number and refrigerant type. These are fixed on to the inside and outside of the refrigerators and the packing cases, and we can also print company logos on the labels if necessary, which is another useful feature.’

Asked whether the B-FV4 has addressed the problems associated with the company’s previous printing devices, Dave Butfield replies, ‘We have carried out extensive testing on the labels in a variety of conditions such as 90 per cent humidity, sunlight and sub-zero temperatures. We have also exposed them to polish, white spirit, soapy water and an alcohol solution to check whether they could withstand general cleaning. Even after the rigours of this process, the labels are still highly legible and we’ve had nothing but positive feedback from our customers. The Toshiba TEC B-FV4’s high performance, incredible efficiency and excellent user friendliness, along with the help and support we have received from Premier Office, has made a big difference to Polestar Cooling and I couldn’t be happier with the results.’