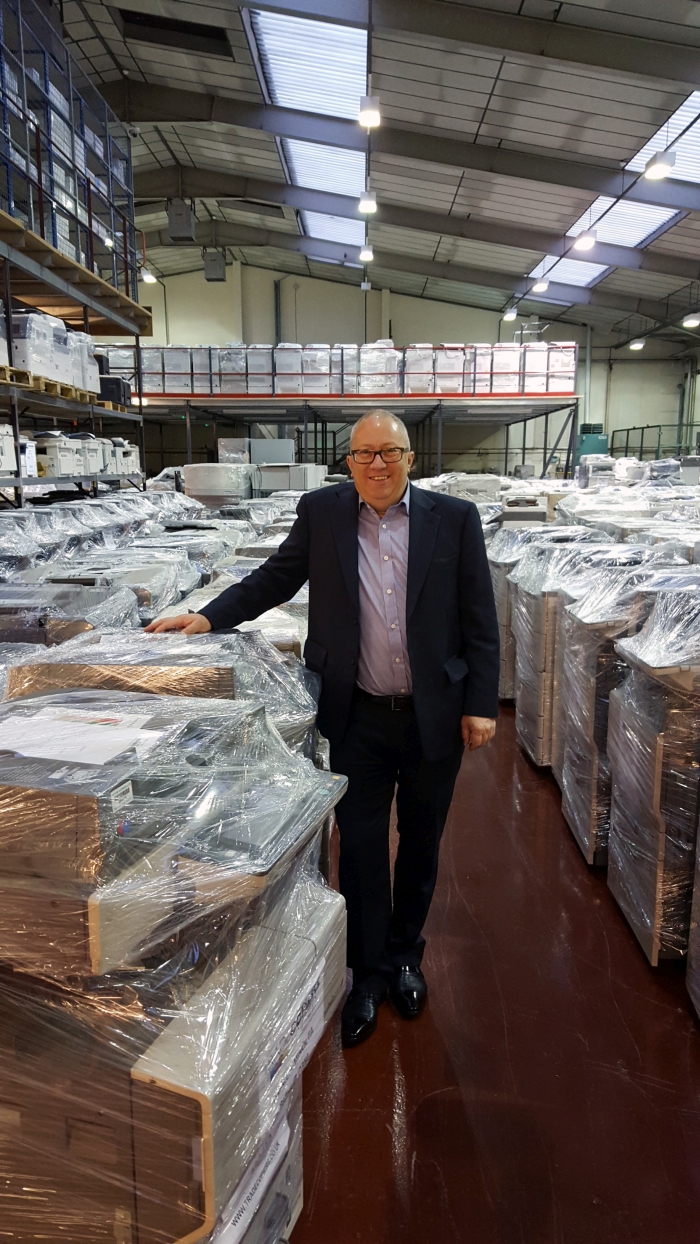 The family-run company has taken on new staff, expanded its fleet of delivery and collection vehicles and is embarking on phase two of a major expansion programme that will see it add two further extensions to head office.

Managing Director Stephen Armistead said that business is going really well. “We are busier than we have ever been,” he said. “Whilst we have enjoyed steady consistent growth year on year, the past twelve months has seen a significant growth spurt. We’ve achieved 30 per cent growth, we’re having to work really hard to stay on top of demand, and I can see that level continuing.”

To cope with the increased demand from both the channel and OEMs, Trade Copiers has boosted headcount, recruiting five additional members of staff to work across the business. New hires include sales and warehousing personnel as well as drivers.

Trade Copiers provides a pain-free way for resellers to generate additional revenue by simply selling the old kit they remove from customers’ premises when upgrading their fleet with new technology. 18 months ago Armistead told PrintIT Reseller that he was actively looking to expand the company’s customer base and work with more dealers nationwide.

“We deliver a professional service to our customers and we pay fair prices,” he said. “We offer dealers an opportunity to earn more from each contract win, in almost every case they have to take out and dispose of the second hand kit they’re replacing – we’ll pay them for it and collect it too.

“We’ve been very successful in meeting our goals and getting a much bigger slice of the used market,” he said, adding that over the past year Trade Copiers has secured a number of big contracts with some major suppliers.

When Armistead set-up the company, he started with a single van to do all of the pick-ups across the country. Trade Copiers now has a six-strong fleet of HGVs and lorries that are on the road five days a week, collecting used MFPs and wide format printers which are then taken back to HQ to have all of the data cleansed prior to resale.

“We have recently purchased a new HGV which has been wrapped in our livery,” Armistead explained, adding that he intends to place an order for another HGV imminently.

Trade Copiers conducts 98 per cent of its business abroad, shipping used machines by the container-load all over the world to destinations including UAE, China, Singapore and Malaysia. Sales in the EU and to a lesser degree within the UK make up the rest. “The volumes resold in the EU are very small now, the big opportunity is most definitely further afield,” said Armistead.

In an average month Trade Copiers exports in excess of 1,500 machines but Armistead said that over the past six months, overseas demand for secondhand MFPs in full working order has gone through the roof. “Export sales have markedly increased, in particular within Asia, the Middle East and Africa,” he added. He attributes this to the weak GBP. “Our customers are taking advantage of the fact that sterling has fallen in value. Whilst it’s not been great for us in the UK, for the rest of the world, the UK is an attractive market from which to buy from.”

Trade Copiers began operating out of a 100 sq. ft. of rented space in a warehouse and moved into new premises that included a 25,000 sq. ft. warehouse which houses around 3,000 machines at any one time a couple of years ago.

“We invested £1 million to secure a much bigger site which would grow with us,” he explained, adding that the move was part of a long-term plan to build additional warehousing and office accommodation to support future growth.

The company has already added two extensions including a new loading dock as well as completing a major office refurbishment and is currently working on phase two. “We are now looking to build two further large extensions on the back which will provide us with more storage space,” Armistead said. Trade Copiers has also acquired another unit locally that is also be used for storage.

The company’s core business is supplemented by a secondary branch that supplies consumables. “This is an additional service we offer to customers and is complementary to our main business,” explained Armistead. “We only deal in original supplies, keep large up to date stocks and offer fast delivery and competitive pricing.” This side of the business has also grown in line with the main operation.