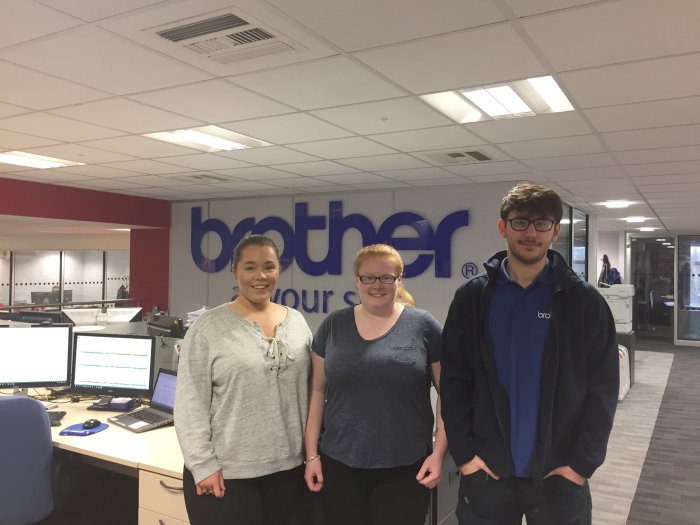 View from the top

Three Brother UK directors, including MD Phil Jones, volunteered to job swap with three of the company’s apprentices on Friday March 10, a move designed to reinforce Brother UK’s belief that recruiting via apprenticeships is beneficial for its business

Brother UK, which has been building its apprentice programme for about three years, really got behind the tenth National Apprenticeship Week which took place 6-10 March.

The company is a firm advocate of apprenticeships as a route to recruit new talent in a very structured way that accommodates for the development that is needed, through the academic elements of their apprenticeship. Apprentices coming in to the company are closely mentored and provided with a level of support that means they get a very in-depth understanding of the business across a variety of areas, not just in relation to the department where they serve their apprenticeship.

Jones insists that apprentices help give the diversity he believes is beneficial to Brother UK’s operation, through the introduction of younger people with fresh ideas, lots of confidence and energy, and the ability to adapt to the ever changing workplace. “Three years ago we had no apprentices, today we have five and will shortly add a sixth. Three prior apprentices have also secured full-time employment with us. We’re big fans, we realise its really positive for our organisation,” he said.

Lead from the top

Digital & Social Media Apprentice, Jessica Wilbraham, was invited into the hot seat to get first-hand experience of what it’s like to lead from the top. Jones left her a comprehensive list of tasks to complete, including an interview with PrintIT Reseller, as well as some pertinent words of wisdom.

In a letter Jones said: “You are going to experience what it feels like to be Managing Director of Brother UK UK. I’ve left some work for you to do which is typical of the type of things where I have to spend my time. Analysis, big picture thinking and people issues. You are in an important seat.”

Jones cautioned that with the job comes responsibility, citing the fact that an MD is responsible for people’s jobs, and part of the role is to ensure good governance whilst keeping the company speedy, nimble and competitive. He also said that the job is often pressurised with interruptions and unexpected deadlines and counselled Jessica to keep her head and prioritise work/actions as much as possible, adding that delegation is key.

Speaking to PrintIT Reseller before the job swap, Jones explained that the objective was to make the experience as real as possible. “The tasks I set were typical of ones that I regularly have to action during the course of a day. These included reviewing the European Stock Report and commenting on any major issues, examining the European Sales Results and preparing commentary for submission to Brother Europe about the UK performance, as well as doing an appraisal of January management accounts and commenting on any issues identified.”

In turn, Jones was charged with reviewing the social media plan for the following two weeks, and looking at Brother UK’s Hootsuite, TweetDeck etc. accounts, suggesting SEO-friendly product/page titles for the website and creating a wireframe for a new scanning solutions page using the Brother UK Styleguide and existing pages and wireframes for inspiration.

In addition to the job swap and as part of a wider mentoring programme it has rolled out across Tameside, Brother UK hosted 50 students from local high schools within the Borough.

Taking time out of his day job – as Digital & Social Media Apprentice – Jones delivered a short inspirational talk to the students, outlining the benefits of apprenticeships and the impact they have on both business and the economy. He explained how he believes that apprenticeships are invaluable in helping to support skills gaps within businesses, as well as providing talented young people with an alternative to going to University in order to progress in their choice of career