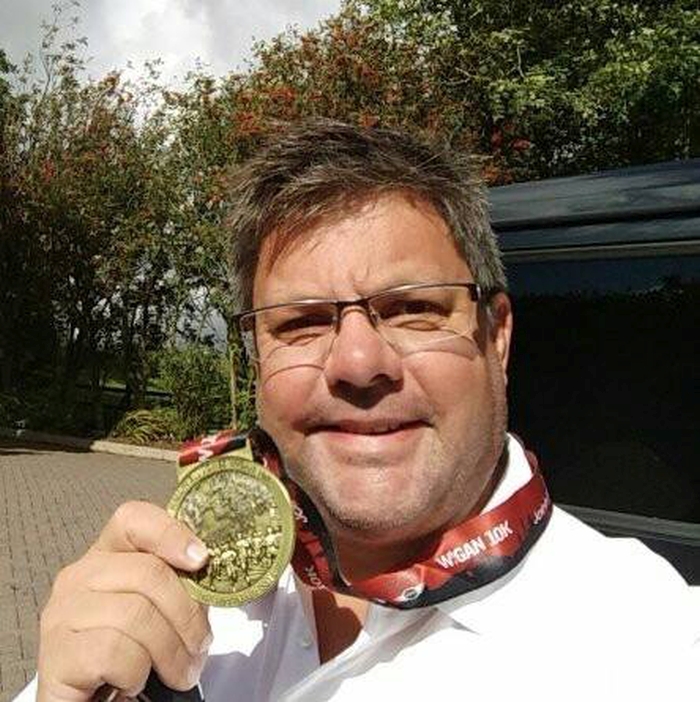 Jonathan Whitworth, Managing Director of DSales (UK) Ltd, the UK distributor for the Develop range of copiers and printers, is taking on four major fundraising events in aid of Joining Jack

Whitworth has taken on a series of fundraising events to raise donations for Joining Jack, a charity which funds awareness and research into Duchenne Muscular Dystrophy each year since 2014. His annual fundraising quest began when he met Andy and Alex Johnson, parents of Jack, a little boy who had just been diagnosed with Duchenne Muscular Dystrophy. Duchenne is a terrible muscle wasting disease that effects only boys and has devastating consequences. It is presently incurable with a very short life expectancy of around 22 years.

Joining Jack is the corporate charity of DSales and it has strong sporting links as Johnson was formerly a player with Wigan Warriors rugby league club. The linked-fingered ‘JJ Salute’ has become a familiar sporting celebration, from Owen Farrell kicking a penalty at Twickenham to Bradley Wiggins on the Tour de France podium amongst the many stars backing the charity of which Whitworth has become a trustee.

Jack’s parents are determined to do everything possible to find a cure for all boys with Duchenne and have displayed remarkable determination to help fnd a cure and/or a prevention of the decline. Whitworth has been inspired by them and Jack, to do everything he can to help, believing that enough progress can be made so that Jack and other boys like him can at the very least enjoy growing older.

Four major challenges
This year sees Whitworth take on four major challenges to raise funds for the charity. The campaign began with the Run Wigan Festival in mid-March. However, extreme weather prevented him getting to Wigan, so undeterred, he braved the Yorkshire snow to complete the 5K distance closer to home.

In July, he will take part in the 50 mile Wigan Bike Ride, for which DSales is also the principal sponsor. Then at the end of the month, he will tackle the gruelling Yorkshire Three Peaks Challenge. Whitworth is aiming to complete the 25 mile route over the three famous peaks of Pen-y-Ghent, Whernside and Ingleborough in less than twelve hours. Finally, in September, he will complete his ‘Fantastic 4’ with the Wigan 10K run.

In addition to Whitworth’s individual efforts, DSales supports and sponsors events such as dinners and golf days. The company has also encouraged its dealer network and other partner organisations to support Joining Jack, which has contributed significantly to the charity. A number of colleagues have taken part in the challenges alongside Whitworth and are justifiably very proud of him as a ‘boss’ to take a lead in backing such a worthy cause.

Giving something back
It’s estimated that over the last five years, the efforts of Whitworth and DSales have raised over £200,000 in donations and sponsorship for Joining Jack.

Commenting on his 2018 fundraising, Whitworth said: “As a business owner I believe it’s very important to give something back to our community. Joining Jack is our corporate charity and it’s hard to think of a more deserving cause for our efforts. Jack Johnson is the little lad who inspired the charity and with his parents Alex and Andy, we are all determined to find a way to combat Duchenne Muscular Dystrophy.”

Anyone wishing to support Whitworth’s efforts can do so by visiting: www.justgiving.com/fundraising/jonathan-whitworth6

It is a devastating and currently incurable muscle-wasting disease, associated with specific inborn errors in the gene that codes for dystrophin, a protein that plays a key structural role in muscle fibre function. Symptoms usually appear in male children before the age of five. Progressive muscle weakness of the legs and pelvis eventually spreads to the arms, neck, and other areas. By age 10, braces may be required for walking, and most patients are confined to a wheelchair by age 12.

Eventually, this progresses to complete paralysis and increasing difficulty in breathing, requiring ventilation. The condition is terminal, and death usually occurs before the age of 30. The outpatient cost of care for a non-ambulatory DMD boy is among the highest of any disease. There is currently no cure for DMD, but for the first time ever, there are promising therapies in or moving into clinical development.